In Germany, the ancient skeleton of a giant 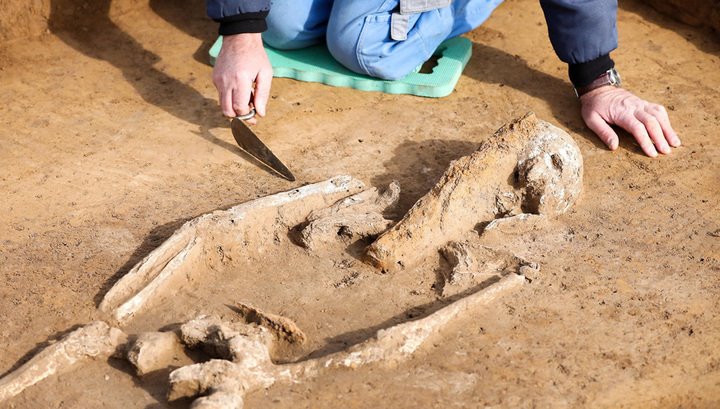 During the construction of the road in the suburbs of the city of Zeitz (the land of Saxony-Anhalt) workers stumbled upon human bones. Archaeologists have discovered on the site of 15 burials, human and equestrian. Among them, the skeleton of a girl pierced by a metal rod and the skeleton of a man 2 meters tall. These burials are 1500 years old.

Preliminary dating, according to archaeologists, is the Merovingian era, 500-751. Scientists did not accidentally mention the first dynasty of Frankish kings – under the Merovingians the lands around modern Zaitsa were on the eastern border of the Frankish Empire, then the possessions of the West Slavic tribes – Sorbs, or Sorbians of Lusatia began.

Knowledge of medieval geography is of great importance for the interpretation of finds – for example, in the summer near the site of the current excavations settlements and burials of ancient Slavs were found. Since borderlands are characterized by a mixture of different cultures, this circumstance, perhaps, will help scientists unravel the mystery of the 15 graves found near Zaits.

The head of the excavation, Susanna Friedrich, is still very cautious in communicating with the press: she refused to talk about the found burials as sensational, preferring to call them “unusual.”

The most unusual, of course, can be considered the burial of a girl of 16-18 years. She was buried face down, her hands tied, and in the back stuck an iron rod, nailing the body to the ground.

“Perhaps the girl was buried in such a way that her soul could not leave the grave. Perhaps she possessed special abilities, inexplicable at the time, that seemed frightening. Or she was just considered a witch, “are just some of the versions suggested by Susanna Friedrich.

“The girl is buried head to the east, and not to the west, as was customary. The iron rod piercing the back and chest, nails the body to the ground and does not let the deceased resurrect. Burial face down pursued the same goal: to take the dead soul from the living, “Friedrich added.

Such burials have already been found to archaeologists throughout Europe – nailed to the ground, buried face down, burned and dismembered bodies of girls and women, whose appearance seemed contemporaries of a frightening, otherworldly.

For example, such burials in 2014 and 2015 were discovered in Italy, and in the countries of Eastern and Central Europe the ancient tradition of combating witches, ghouls and other zombies is still alive here and there. 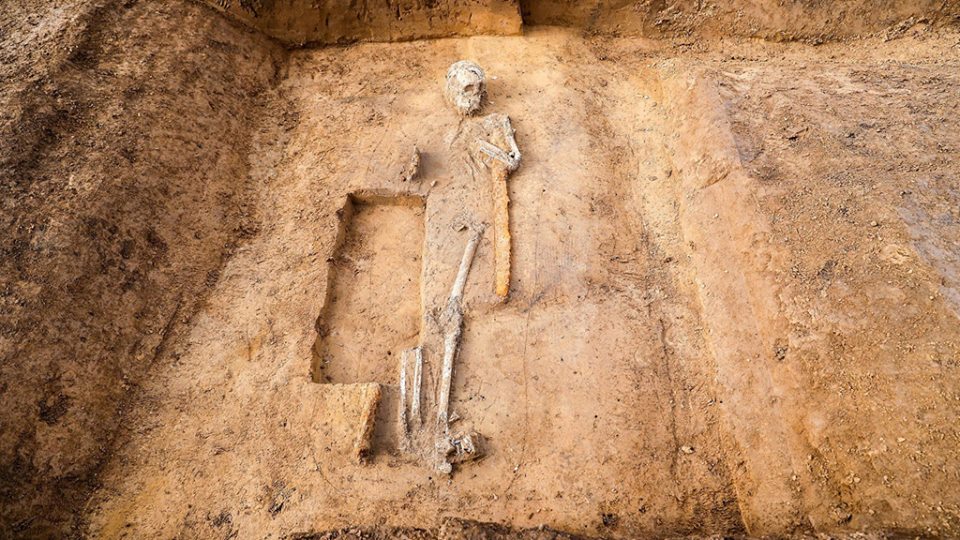 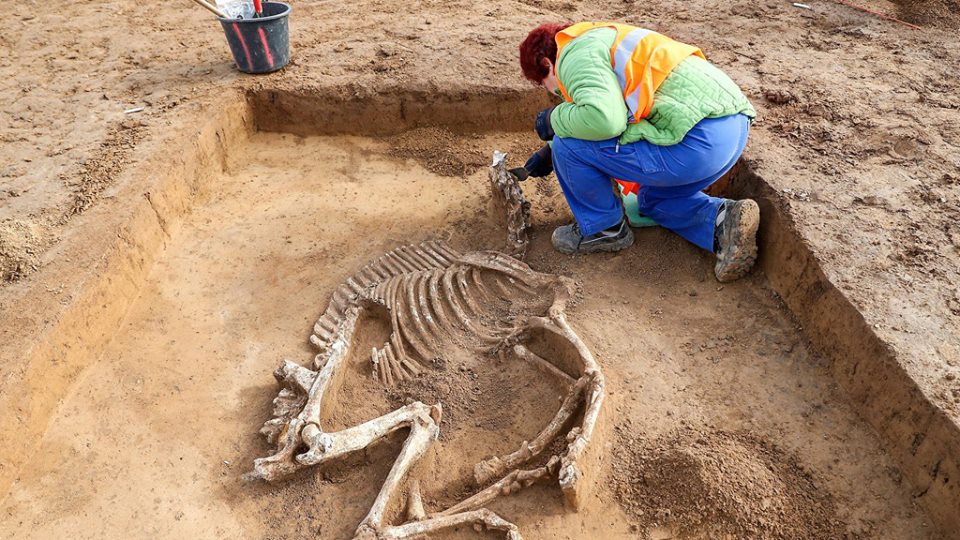 On the same site, archeologists discovered the remains of a very tall man, whose growth during his lifetime was almost two meters. At the time of death, the man was about 30 years old, he was buried with a sword and a spear, and next to his tomb found the skeletons of three horses.

“The remains of the giant, apparently, belong to the warrior, perhaps the leader. In his left hand he holds an iron sword, on the right side there are remains of a spear. Clothing on the body of a man was strapped in a belt and fastened with a fibula. But the horses found near the graves, most likely, have nothing to do with the warrior, “Friedrich said. 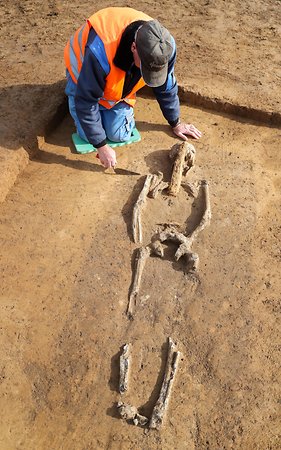 Another unusual burial – a grave with a pile of human bones, as if piled into a heap.

“We do not yet know how to explain this. Grave thieves here hardly had time to visit – their traces we did not find, besides ornaments from a glass and bronze laid in a tomb untouched “, – Susanna Friedrich speaks.

The study of the mass grave, as well as the remains of a witch and a giant 1500 years old, will take time – perhaps it will take years to wait, as in the case of the burial of the “Celtic Princess” from Heneburg: the first results were published only 7 years after the discovery.