In Greece have found the oldest living tree 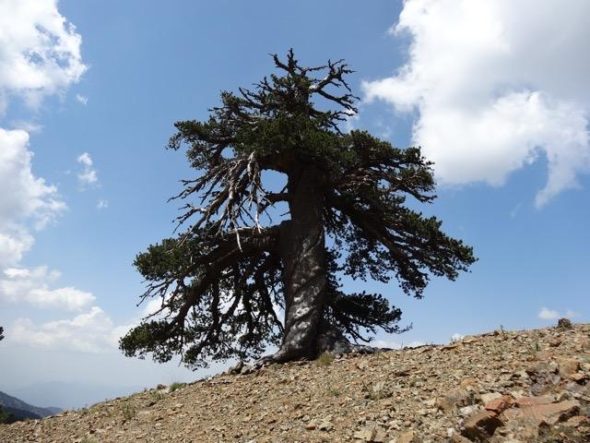 A team of physicists and botanists found in the mountains of Pindos in Northern Greece millennial Bosnian pine, the oldest to date the tree of Europe, which was a contemporary of Prince Igor Rurikovich and the Byzantine Emperor Constantine VII Porphyrogenitus.

It is surprising that this complex and extremely interesting organism survived in such a restless environment, in that part of the Land that has been inhabited by humans for over three thousand years. Many years ago I read a thesis in which mentioned this very interesting forest. Now we were able to take a sample of its wood from the center and count the annual rings, which turned out to be 1075 pieces, ” says Paul Krusic (Paul Krusic) from the University of Stockholm (Sweden).

This tree, which scientists now call Adonis, lives in the company of several dozen other older trees, whose age, according to preliminary estimates of Krusica and his colleagues, also is approaching to a thousand years or even passes through this mark.

Such trees as he says, interesting science not just for study of the secrets of their longevity, but for the reason that they and their annual rings represent extensive climatic record length in the time that the tree had lived on Earth. Such Chronicles have helped scientists to uncover the mystery of the retreat of the troops of the Mongols during their campaign in Europe in 1242, and also pointed to one of the most powerful supernova that hit the Earth in 774 year.

As scholars have noted, it is surprising that similar trees in the face of Adonis and his neighbors remained in that part of Europe, which was the subject of a conflict between different empires which were, or tried to conquer the Balkans and Greece. For example, the 500th anniversary of the Adonis in the part of Greece where it grows, was conquered by the Turkish Ottomans, and the onset of the Millennium, it was necessary the occupation of Greece by the troops of Nazi Germany and its allies.