In human saliva found a new form of life 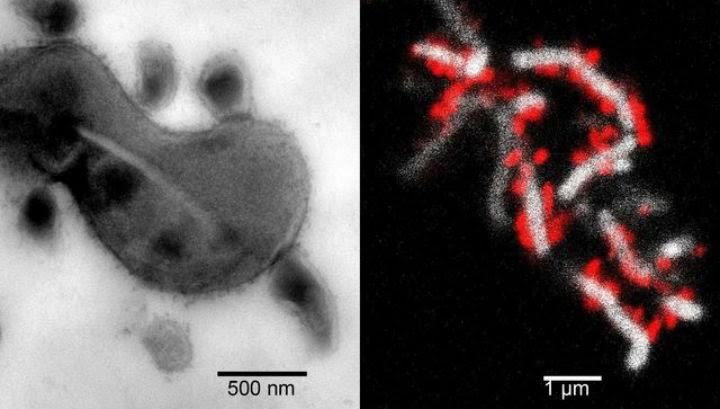 The opening of the brand new form of life is an incredible success for scientists. A team of American microbiologists found in the saliva of the smallest bacterium, which is a parasite on other bacteria and is completely dependent on his master. Microorganism under the working title TM7x belongs to the so-called microbial “dark matter”, that is, the microbes that cannot be cultivated in the laboratory.

A team of researchers from the University of Washington and University of California Los Angeles, led by Jeff McLean (Jeff McLean) was looking for different strains of bacteria that live in the human oral cavity. For this they took from volunteer samples of saliva were grown on a nutrient medium of the colony is inhabited by microorganisms and carried out DNA analysis of all of the installed types.

In the samples of the bacteria Actinomyces odontolyticus researchers are faced with a mysterious, unnatural for this species a fragment of the genetic code. A similar sequence has already been described in previous works, but its origins still remained unknown.

Scientists have carefully studied the bacteria under the microscope and to my surprise found on their membrane many much smaller organisms.

But more than that the researchers were stunned when he revealed the genome of a new species. It turned out that it consists of only 700 genes (for comparison, the genome of A. odontolyticus themselves contains 2200 genes) and unable to produce its own amino acids necessary for building proteins. That is, a microorganism is completely dependent on its host.

By the way, are themselves parasitic on other bacteria bacteria. They were first discovered about 40 years ago and they belong to the genus Bdellovibrio. However, these microorganisms are free living cell that literally prey on their future owners and breed inside of them.

In his report at the annual conference of the American society for Microbiology (ASM) McLean reported that TM7x fixed on the outer shell of actinomycetes and suck the of them nutrients. In the later stages of infection, the uninvited guests are doing in the large membrane openings and the contents of the host cell leaking.

Biologists believe that new species of bacteria are not unique, but only represents “the tip of the iceberg”.

The discovery shows that bacteria-parasites cannot be cultured apart from the host. This explains why tiny organisms have not been seen before. According to McLean and his colleagues, in the nature exist many similar species.

It is particularly important that new microorganisms were dangerous not only for the affected bacteria, but for humans. Scientists noticed that high concentration of their DNA contained in the saliva of people with gum disease or cystic fibrosis. It is known that actinomycetes contribute to the defeat of the oral mucosa, but it is easily destroyed by white blood cells – macrophages.

But, it seems, actinomycetes, infected with parasites, become elusive to the human immune system. Some bacteria evade macrophages and aggravate the course of disease. The researchers can’t say why this happens, but, undoubtedly, this “acquired resistance requires the most careful study.