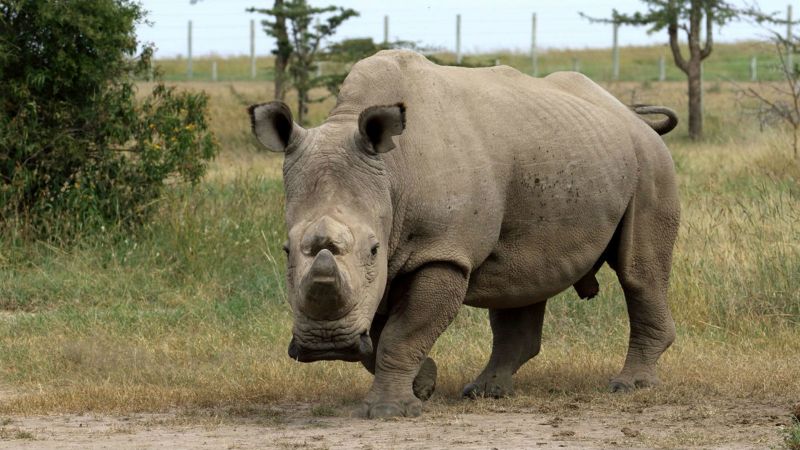 A group of specialists managed to get full eggs from the last two individuals of the northern white rhinoceros, the females Najin and Fatu, in the Ol Pageta Nature Reserve in Kenya. This was reported on Friday by the BBC multimedia corporation with reference to the Kenyan authorities.

“The current success of an international team of scientists has become an important milestone in the conservation of endangered species of animals,” said Kenyan Tourism and Wildlife Minister Najib Balala.

The genetic material taken — five oocytes from each female — has already been sent to Italy at the Avantea Science Center, where scientists will try to reproduce the northern white rhino under laboratory conditions.

Najin and Fatou were born in the Dvur Kralove zoo in the north of the Czech Republic, 30 km from the city of Hradec Kralove. In the hope of obtaining offspring from them, it was decided to transfer the female rhino to Kenya. Since arriving in the Ol Paget nature reserve in 2009, Najin and Fatou have been living under round-the-clock surveillance by experts and guards.

Death of the last male
The world’s last male of this rhino family, Sudan, died at the age of 45 at Ol Paget last spring. As scientists point out, according to biological parameters, his age corresponded to 100 human years at the time of death. The necessary genetic material was taken from Sudan, which scientists are now going to use to fertilize the eggs received from Najin and Fatou.

Specialists also have at their disposal reproductive genetic material from three other males of the northern white rhino, which is stored frozen. However, the Italian laboratory will use material from only two males, including Sudan, to fertilize the eggs of Najin, who is 30 years old, and her 19-year-old daughter Fatu. The need to remove their eggs is due to the fact that none of these females can bring pregnancy to an end for medical reasons.

“An operation in Kenya means that in vitro (in vitro) reproduction of the northern white rhino, which has never been in the past, for the first time has become a true reality,” said Cesare Galli, an Avantea lab employee.

Alternatives
A number of experts are skeptical of this project, indicating that if the cubs of the northern white rhino appear, they will be the closest relatives. And their lack of genetic diversity, according to proponents of this approach, does not guarantee the viability of such biological organisms.

Some scientists from this group support an alternative option for partial conservation of the northern white rhino – mixing its genetic material with the material of the southern white rhino. This is exactly what was done in 2018, when specialists announced the appearance of the first hybrid embryo of these two subspecies of rhinos. Now these embryos are in a frozen state.

The path to extinction
Modern science believes that the northern white rhino is a special subspecies. Back in the 60s of the last century, their livestock in the traditional habitat – the upper reaches of the Nile reached 20 thousand. These animals lived on the territory of modern South Sudan, Uganda, the Central African Republic and the Democratic Republic of the Congo. However, by the beginning of the current millennium, they were exterminated, and in 2008, poachers killed the last northern white rhinos that lived in the wild.

Currently, there are five species of rhino on Earth, they live on two continents – in Africa and Asia. One of the main reasons for the killing of these animals by poachers is the belief that their horn can cure many diseases and also restore youth to people. These representations are especially widespread in Asian countries.

Modern rhinoceros species appeared on Earth 26 million years ago. In the middle of the XIX century, only in Africa their number exceeded 1 million individuals. To date, the number of all species is about 30 thousand.