In MIT, we learned how to control a robot with the help of brain waves 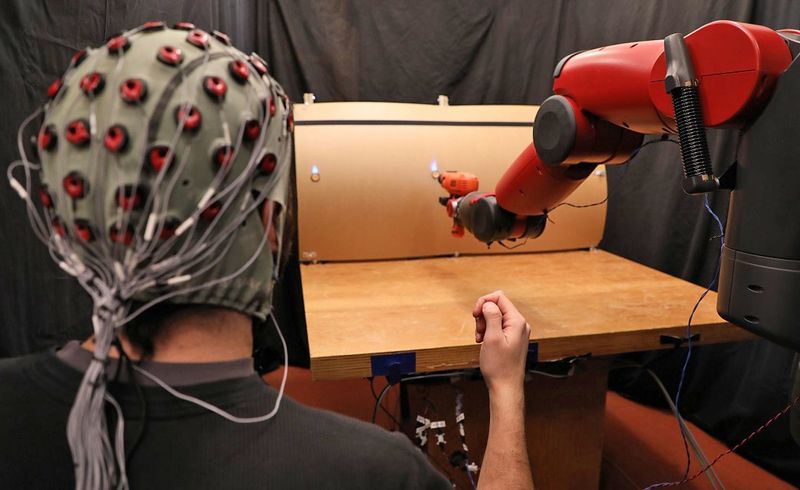 Researchers from MIT have developed a new, more intuitive way to control robots – through gestures and brain waves.

Specialists from the Massachusetts Institute of Technology (MIT) came up with how to more intuitively manage the robots. In the new technology, researchers decided to use brain signals, which are called “error potentials” (ErrPs): such signals occur when a person notices an error.

The new system monitors the brain activity of the person observing the movements of the robot, and if ErrPs arises – because the robot made a mistake – the robot suspends the work so that the user can make adjustments. The latter is performed using an interface that measures muscle activity: a person makes certain gestures with his hands to choose a suitable correction.

In one test, MIT engineers used the robot Baxter, developed by Rethink Robotics. The robot had to bring the puncher to one of the three possible points on the panel in front of it – while the movement of the Baxter was corrected by the person. According to the results of the experiment it turned out that in this way the robot began to choose the correct point in 97% of cases – against 70%. It is noted that the system can work with strangers.

Such a technology can – theoretically – find many applications. For example, perhaps it will open up new opportunities for the management of work robots in factories or, for example, will be useful for older people or people with speech disorders or limited mobility.