In Mongolia found the ancient remains of the “dinosaur duck” 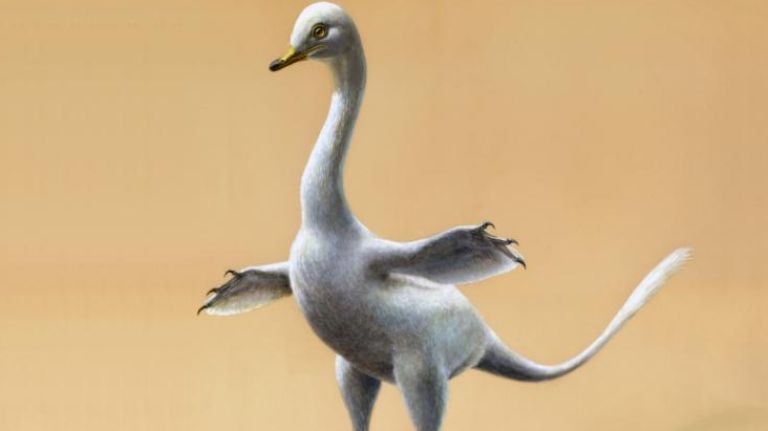 Scientists have discovered on the territory of the Gobi Desert the extremely unusual remains of a feathered dinosaur, reminiscent of a toothy and clawed duck or a swan, and published a description in an article in the journal Nature.

“If you compare the remains of a gal’shkoraptor not with dinosaurs, but with other animals, then it is most similar not to your relatives, but to waterfowl and reptiles. Using a source of synchrotron radiation, we were able to show that predatory bipedal dinosaurs not only knew how to run and fly, but also to dive and swim! “, Says Andrea Cau from the University of Bologna in Italy.

In the last two decades, a real revolution has taken place in paleontology, changing the way we look at dinosaurs and birds. In particular, the scientists found out that almost all dinosaurs had feathers and that many of them hatched eggs, uncovered the secrets of the color of the first birds and the principles of their flight, and also had time to redraw the tree of their evolution several times.

Today among paleontologists there is no agreement on how and why the ancestors of birds acquired feathers and wings. Some scientists adhere to the classical theory that feathers allowed birds to master a new ecological niche – airspace – inaccessible to dinosaurs. Other paleontologists believe that the feathers did not appear for the sake of flying, but for heating the body or attracting the attention of females.

Kau and her colleagues discovered one of the most amazing feathered dinosaurs, having studied the fossil of Velociraptor, found in the distant past by “black paleontologists” in the vicinity of the town of Ukhaa-Tolgod, located in the south of Mongolia, at the very edge of the Gobi Desert.

According to Pascal Godefroit of the Royal Institute of Natural Sciences in Brussels, Belgium, the bizarre discovery of illegal traders in antiquities fell into the hands of scientists just two years ago when her last owner, amateur paleontologist and antiquities collector Francois Escuillie, , decided to return it to Mongolia and asked professional paleontologists to classify it.

Initially, according to the authors of the article, they did not even believe that this fossil is real. “Velociraptor” from Ukhaa-Tolgoda was like a kind of “Frankenstein monster”, glued from the parts of the body and bones of other dinosaurs, birds and quite other reptiles that do not have close kinship with the “terror lizards”.

The miracles of evolution

For this reason, paleontologists enlightened the fossil using a particle accelerator and obtained a three-dimensional model of the remains of a dinosaur. This allowed them to check whether the finding of “black paleontologists” from a single piece of rock or whether it was glued from many other fragments of fossils and sold for big money to overly gullible collectors.

Contrary to the expectations of scientists, the discovery from Ukhaa-Tolgoda turned out to be a real fossil, the remains of a fairly large dinosaur with an extremely bizarre appearance, diet and way of life. Scientists named it Halszkaraptor escuilliei in honor of Esculje and Polish archaeologist Halszka Osmolska (Halszka Osmolska), which opened a lot of dinosaur remains in Mongolia at the end of the last century.

Another distinguishing feature of “utkodinozavr” – in its beak and in the upper jaw there are many holes that were once filled with a lot of nerve endings. The similar device has a muzzle of crocodiles and a beak of some waterfowl, which indicates that the Mongolian dinosaur was able to dive and obtain food in water or at the bottom of lakes and rivers.

This is also supported by the fact that the center of gravity of this reptile was located in an unusual way for land predatory dinosaurs. He helped her to quickly swim in the water, using rudimentary “wings”, like penguins, and while doing so she could run well overland with her feet.

Such a discovery, as scientists conclude, suggests that dinosaurs have mastered all ecological niches, including air and water, and not only dominated on land, as paleontologists previously thought.