In Moscow, found a treasure of copper coins and parts of a wooden pavement of the XVIII century 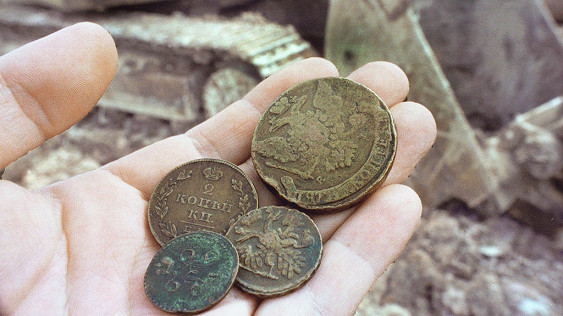 Preparatory works for the improvement of the program “My Street” helped metropolitan archaeologists find dozens of personal items of Muscovites, as well as the remains of urban infrastructure. Their age ranges from 100 to 500 years. All findings were discovered on the Boulevard Ring when preparing tranches for future communications.

“The finds in the area of ​​the Boulevard Ring are represented as preserved fragments of structures – drainage systems, tram tracks, and utilitarian, small domestic objects,” said the head of the Moscow Department of Cultural Heritage Alexei Emelyanov.

On the Strastnoy Boulevard were found the remains of a timbered pavement of the XVIII century. These are longitudinal beams or logs, which were laid in the basis of wooden paving.

On the Petrovsky Boulevard was found a treasure of the XVIII century from 12 copper coins. As archaeologists say, the treasure is similar to the one found last year in Voznesensky Lane. The coins were in a purse or bag that did not survive. The amount was found small.

“Most likely, the money was stashed on the daily expenses. Such copper coins were in use during the reign of Catherine II and Paul I, “the Moscow City Hall said.

On Pokrovsky Boulevard archeologists found fragments of two stone tombstones, which are almost 500 years old. It is noteworthy that these are two white plates of the 16th century without any indication of who was buried beneath them. Only on one of the slabs is the picture cut: presumably, a cross on Mount Calvary.

“This does not mean that these plates were without any designations. Perhaps the inscriptions were painted and simply erased from time to time. The gravestone with the inscriptions made with paint we already found during the work in the Church of Mikhail and Fyodor of Chernigov in Chernigov Lane, “Aleksey Yemelyanov said.

From the elements of the historical urban infrastructure were found brick collectors of the XVIII century on Gogol Boulevard, part of the log drainage system of the XVII-XVIII centuries on Nikitsky Boulevard. Archaeologists also found a cobblestone pavement of the early 20th century on the Yauzsky Boulevard and tram tracks with wooden sleepers of the same time on Chistoprudniy Boulevard.

During the archaeological monitoring on the boulevards, many small household items, remnants of dishes, shoes and clothes were found. This is what townspeople used in everyday life several centuries ago. Among such artifacts:

– Vargan (a small musical instrument played on, tightly pressed to the teeth or lips);

– Baptized (flint) of the XVI-XVII centuries;

Metal buttons, shoe hocks and fragments of leather shoes, commodity seals, lead bullets and crosses, oven tiles, as well as fragments of ceramic, glass, earthenware and porcelain utensils have also been found. Most of the items belong to the XVI-XIX centuries.

According to Aleksey Yemelyanov, about 5-6 thousand artifacts and large archaeological sites are found in Moscow for the archaeological season. In the past year, thanks to the “My Street” program, archaeologists have revealed an additional thousand items. The head of the Department of Cultural Heritage is convinced that the season of work that has begun will give even more finds.

Recall, these are not the first artifacts that were discovered by archaeologists who are watching the preparatory work for the program “My Street”. In the area of ​​Novaya Ploshchad they found more than 150 artifacts, as well as a “rumor” in the preserved section of the Kitai-Gorod wall.