In New Zealand, found the remains of an ancient bat 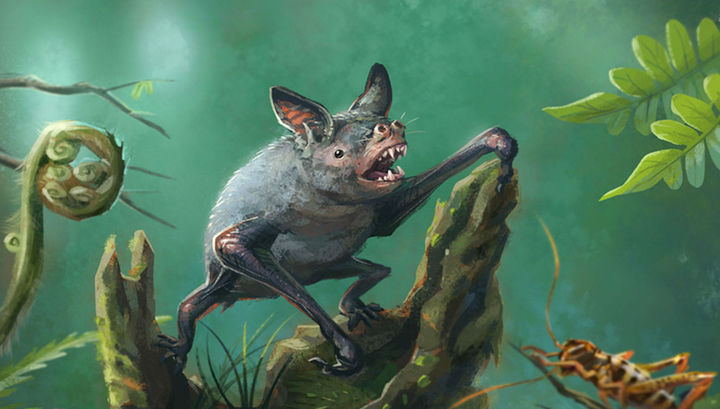 In New Zealand, fossil remains of an extinct unusually large bat were found. At first glance, the animal can not boast of dimensions: according to the authors’ estimates, the mass of its body was about 40 grams. However, this means that it is three times larger than the average bat among the living species.

The animal belongs to a hitherto unknown species and species. It was called Vulcanops yennivorthyae. This is the first new genus of bats discovered in New Zealand over the past 150 years.

But the records do not end here. It is assumed that this species lived in burrows. And this is the biggest known species of bats that prefer this way of life.

Another feature of the beast was his diet. Analysis of the teeth showed that the bat roasted small vertebrates, and also consumed a lot of plant food. This diet is not found in the living bats of Australia and New Zealand, but it is similar to the preferences of their “cousins” from South America.

The fact is that 50 million years ago, both continents were part of one “fragment” of the supercontinent Gondwana. In those distant times, the average temperature on Earth was 12 degrees higher than today’s, and Antarctica was covered with forests. After the continents and the islands wandered to wherever, the evolution of the bats on each of them went its own way.

V. jennyworthyae lived much later than New Zealand’s separation from the mainland, but it turns out that he retained the “ancestral memory” in his diet. The find is from 16 to 19 million years, that is, it belongs to the early Miocene. This is yet another proof that the fauna of that era was much richer than one can imagine from the few remaining relicts, such as a kiwi bird.

According to the researchers, the cause of extinction of V. jennyworthyae could be climate change – in the middle of the Miocene it became colder and drier (which affected vegetation and environmental conditions).

As reported in the press release of the study, now in New Zealand live only two species of bats, which along with humans are the only local land mammals. All the others in the last 800 years brought here exactly people.

This is reported by a group of paleontologists from Australia, New Zealand, the United Kingdom and the United States in an article published in the journal Scientific Reports.