In Norway, created the robot-snake for underwater work 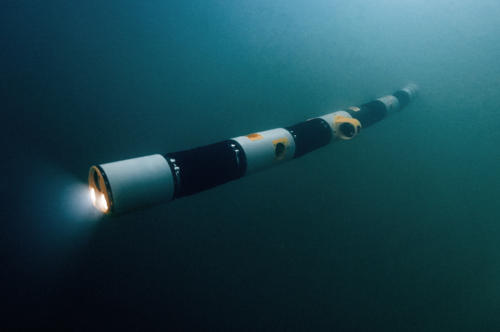 Norwegian robot Eelume AS last year struck the public with its unusual appearance, is finally completed. Flexible robotic snake designed for underwater repair and research, and may hold at the bottom of the ocean all the time, without rising to the surface.

The Norwegian company Norwegian underwater robotics has developed an unusual underwater robot Eelume AS resembling a long snake, made of metallic cylinders. In fact, the design of the new system and in fact was inspired by real snakes, because it is one of the most simple and convenient ways to realize a model of steady movement in liquid environments. The movement of the robot results in a number of engines, and his body itself is equipped with still cameras with which the researchers can monitor.

For the first time Eelume demonstrated their abilities last year, when a prototype of the robot is very impressive writhing in the test tank. Today’s prototype is tested in real ocean water, PREZIOSO Linjebygg Subsea Test Center that Tronheim fjord. The face of bright lights, with a flexible body and side cameras, Eelume AS really reminiscent of the futuristic submarine.

Unlike a snake, the robot has a modular structure. This allows users to connect to the front part of the various tools to add or remove engines, cameras, sections and devices. Thus, the owners of the robot can reconfigure it for different functions. The robot can “live” directly into a special dock on the bottom of the sea where he could swim to the carrying out of the task or simply repair of underwater infrastructure — pipelines, oil rigs, etc. without worrying about what the weather is now on the ocean surface.