In one of the airports in Canada began work robotic falcon 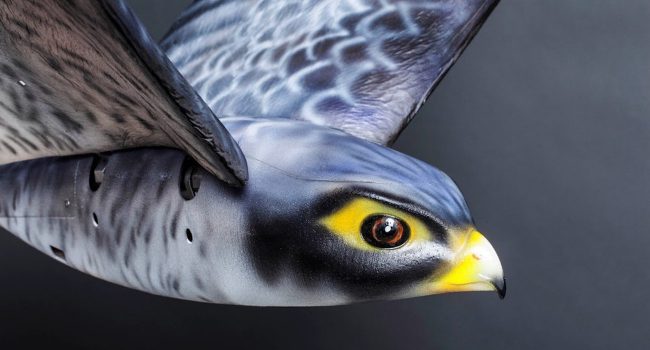 Protection of some air zones from flying birds is not such a useless occupation as it may seem. For example, for the safety of takeoff and landing of aircraft in the airport area use the sounds of special tonality and even laser installations. Some airports use a special “falconry”. These are inscribed birds that catch “bird-offenders”. But most of all went to the staff of the international airport of Edmonton (Canada). To protect the airport from the attacks of live birds, they use robotic birds.

Robot falcons are called Robird and were developed at the University of the Netherlands city of Twente. In its form, color, as well as the nature of the flight, Robird from afar can easily be mistaken for a real falcon. During the flight, the robot, waving its wings, very accurately copies its natural counterpart. In addition, during a series of tests it was found that even wild birds take the robot for a dangerous predator and leave the place of its “habitat”. The robotic bird is able to accelerate to a speed of 80 kilometers per hour, and is controlled remotely with the help of easy-to-use equipment. As stated by Niko Niienhuis, president of Clear Flight Solutions, the main supplier of Robird and a major manufacturer of unmanned aerial vehicles,

“Now we are implementing Robird in a variety of areas that need protection of airspace. For example, the main area of ​​use of robotic birds is now agriculture. And the fact that our robots can be used and are already starting work in one of the airports in Canada is just fantastic news! This suggests that aircraft like Robird can be very popular. ”