In Peru, traces of mass sacrifices of children 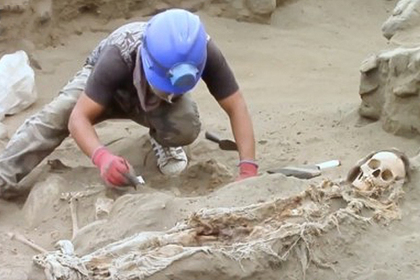 A group of archaeologists discovered on the northern coast of Peru the remains of more than 50 children – representatives of pre-Columbian culture Chimu (South America) – who were sacrificed.

Excavations were conducted in Pampa La Cruz in Trujillo. Skeletons of children aged 6-14 years with a remote sternum were wrapped in cotton shrouds. It is noted that the mass grave site is located one kilometer north of Huancakito, where 140 children and 200 cubs of lamas were found. However, according to scientists, during the excavations, even more remains can be found.

Sacrifice on the coast took place over 600 years ago during a ritual designed to prevent catastrophic downpours and floods caused by the powerful phases of El Niño.

Another mass ritual murder in Huancakito occurred, it is estimated, 550 years ago. The scene of the massacre is 300 meters from the Pacific Ocean, among residential areas outside the city of Trujillo in the region of La Libertad (north-west of Peru). This find was the largest evidence of child sacrifice in Peru.

Pre-Columbian Chimu culture lasted from 1250 to 1470. The state where it originated was called Chimor, and in the capital Chiang Chan lived up to 60 thousand people, which made this city the largest metropolis in South America of that time. At the beginning of the XVI century Chimor, conquered by the Incas, was destroyed by the Spanish conquistadors.