In Poland, archaeologists have unearthed hundreds of artifacts of Ancient Russia 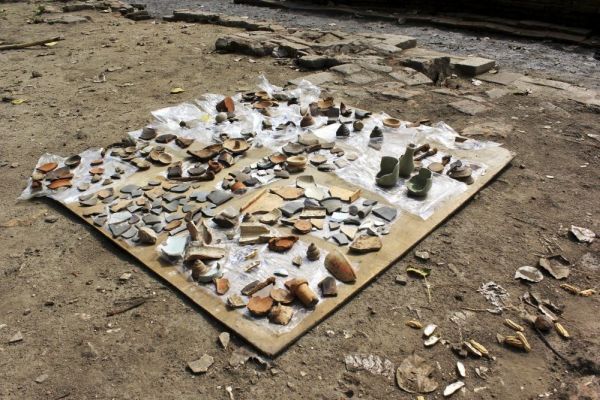 During excavations in the village of Ponyaty-Wielki, Polish archaeologists discovered about 200 metal artifacts 800-1000 years old, including items characteristic of the culture of Ancient Rus.

According to Nauka w Polsce, artifacts, including a gilded spur and women’s jewelry, were discovered by archaeologists during excavations in an 11-13th century settlement.

Field research in the area began only last year, although scientists previously knew about medieval traces of human presence here. The fact is that the settlement is located on the territory of a natural monument. Therefore, large-scale archaeological research has not been carried out here.

However, over the past two years, the archaeologists admitted here have managed to make a lot of discoveries. In particular, they proved that there was a settlement here, founded at least in the XI century.

Archaeologists have discovered the remains of a furnace, utility pits, wells and other objects. A surprisingly large number of metal objects and ceramics were found, they said.

“Such wealth is rarely found in the area of ​​open settlements of that period, both in this part of Mazovia and beyond,” says the head of the excavation Jakub Affelski. “Such valuable finds are more typical of castles.”

Two objects attracted the greatest attention of researchers: a lead plate depicting a human face, and a decorative application made of a copper alloy, also made in the shape of a face. According to Affelsky, the lead artifact is possibly an unusual seal.

And the copper artifact probably served as an ornament for clothing. It may have been a belt buckle, as indicated by the mounting holes, for example. Scientists note the design of these ancient products – the craftsmen clearly depicted ears, eyes, beard and hair.

Another amazing find is an encolpion, a “capsule” to be worn on the chest, in which Christian relics or quotes from the Bible were kept. Scientists emphasize: despite the fact that the settlement was located in the then territory of Poland, many objects found here come from the eastern territories, including Ancient Russia.

According to Jakub Affelski, the excavated settlement could have been a kind of metallurgical center, where products were produced for the nearby castles in Naselsk and Pultusk.

This is evidenced by the fragments of slag and metal blanks found. In turn, a large number of metal objects may indicate that this settlement was a major center of trade.

By the way, this is one of those mysteries that have yet to be solved. In those days, the metal was highly valued. Products made from it were very expensive. The metal was carefully collected even for melting. Therefore, it is not clear why so many metal objects survived in the settlement.

“We have not found any sign of an armed invasion, that the settlement was killed in the attack,” Affelsky says. “It’s still a big mystery to us.”