In Russia, effective protection of ships from biofouling was created 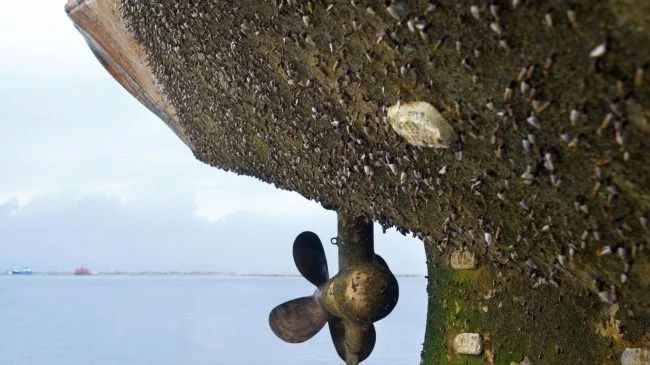 Biocompounding is a process in which various organisms begin to multiply on the surface of the hull or other structure that is in the aquatic environment. In the case of ships, these are usually bivalve molluscs (dresses, mussels, shipworms, etc.), barnacles, polychaetes, macrophytes and other creatures. Researchers from the St. Petersburg State University (St. Petersburg State University) have created a unique coating that can protect the surface from this unpleasant process, thereby saving ship owners an impressive amount of time and money.

To assess the importance of the discovery of Russian scientists, just imagine that more than $ 100 billion is spent annually on combating biofouling in the world. More often than not, paints and varnishes with toxic copper compounds are used to protect the hulls of ships and the structures that remain in the water environment. It is then done that substances kill living organisms, not allowing them to gain a foothold on the surface. Of course, all this does not pass without a trace for nature. Poisons accumulate in the water and the creatures that live in it, spread and disrupt the work of entire ecosystems. There are frequent cases when people are being poisoned by fish because of the high content of copper in it.

Employees of St. Petersburg State University – marine zoologist Alexander Railkin and professor-biochemist Nadezhda Kuleva – managed to find environmentally friendly compounds that can be used to protect surfaces from biofouling. The innovative coating has already been tested in natural conditions – in the basins of the White and South China Seas, and at the moment tests of compounds on sea stars and disputes of marine brown algae are underway in the laboratory conditions of the “Observatory of Ecological Safety” of St. Petersburg State University.
“I created a special index, which allows us to compare the effectiveness of our substances and industrial paints with copper compounds. It turned out that the new coating protects against fouling almost 100% and is in no way inferior to what is already being used, but it does not harm the environment, “Alexander Railkin shares the details of his discovery.

Russian scientists also investigated the question of the patterns of attachment of living organisms to hard surfaces. Most often this occurs in the early stages of development: initially temporarily, and then on an ongoing basis. It is due to the fact that the body needs to grow as hard as possible to the ship, so that it does not tear off the current. Researchers came to the conclusion that it is necessary to influence the organisms precisely at the stage of “temporary fixation”, until they finally grow to the surface.

On the achieved, the researchers do not stop. In the very near future, scientists from St. Petersburg State University together with chemists from the Scientific Research Institute of Synthetic Rubber named after academician SV Lebedev plan to test nitric oxide as a protection against biofouling. This molecule reversibly changes the functions of proteins, directly affecting the ability of larvae of different organisms to attach. Among other things, scientists are also looking for a way to reduce the toxicity of classical compounds containing copper. Russian scientists believe that their development will be in demand around the world, given the scale of the problem of biofouling.