In Russia experienced a flying motorcycle 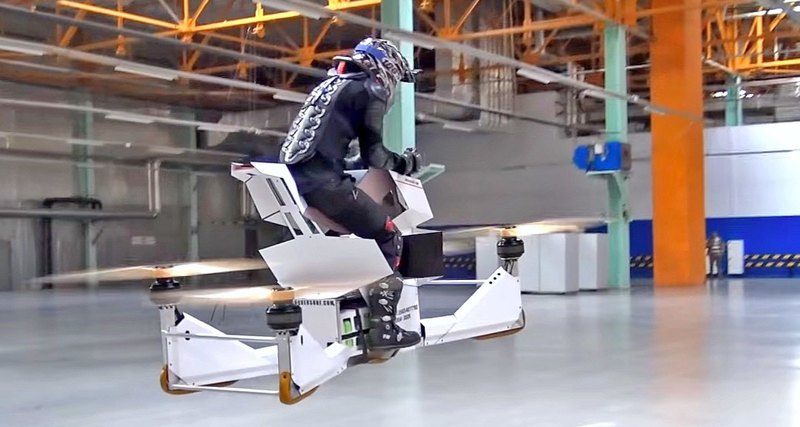 At the international competitions in high-speed motorcycle racing, which were held at the Moscow Raceway near Moscow, the first public debut of the Russian flying motorcycle HoverBike S3 was held.

According to TASS, the pilot on a flying motorcycle HoverBike S3 climbed to a height of about a meter above the ground and flew about a kilometer. According to the developer of the flying motorcycle and the director of the company HoverSurf, Alexander Atamanov, personal air transport is the only chance to solve the transport problem in megacities. It is only necessary to “open the air” for such compact and environmentally friendly flying machines as hoverbike or air taxi. True, we still have a lot of problems with this in terms of legislation: every pilot must pass state registration of an aircraft and receive a license. Zones, over which the flight of any apparatus is prohibited, is even in the Moscow region, not to mention the closed for flights to Moscow.

The flying motorcycle HoverBike S3 is a development of Russian engineers and is a hybrid of a quadrocopter and a motorcycle, working on electric motors. The concept and seat resemble an ordinary motorcycle, but instead of wheels – four screws on special brackets, and on the dashboard, besides the usual switches – two control joysticks. The flight altitude is still limited to five meters. Hoverbike’s carrying capacity is 150 kilograms with its own mass of 100 kilograms, half of which is a rechargeable battery. One charge will be enough for a flight lasting 30 minutes, and the full charge time of the battery is four hours.

As on the hydrocycle, before the flight the pilot puts a check on his hand in order to switch off the power system in case of an emergency. Airbags HoverBike S3 no. The maximum speed of a flying motorcycle is 70 km / h. It has three methods of control: on the radio channel from the console, manual control by means of joysticks, or by entering coordinates on the GPS. According to the developers, hoverbike works at -20 ° C, freely passes through any door and allows it to be stored in an apartment. For take-off and landing of a motorcycle there is a standard parking place for the car.

The company HoverSurf is developing three types of aircraft: cargo drones, flying motorcycles and drones-taxis. Cargo drone is an unmanned aerial vehicle, the task of which is to deliver various cargoes weighing up to 100 kilograms. The purpose of a flying motorcycle is sport, competition, extreme, entertainment, and a flying taxi – personal transport and transportation of people. Anyway, Vnesheconombank is already ready to invest several million dollars in HoverSurf to complete the tests and bring the hoverbike to the market. Its cost will be from 50 to 80 thousand dollars, depending on the configuration.