In September 2020, for the first time in European history, registrations for electrified vehicles overtook diesel 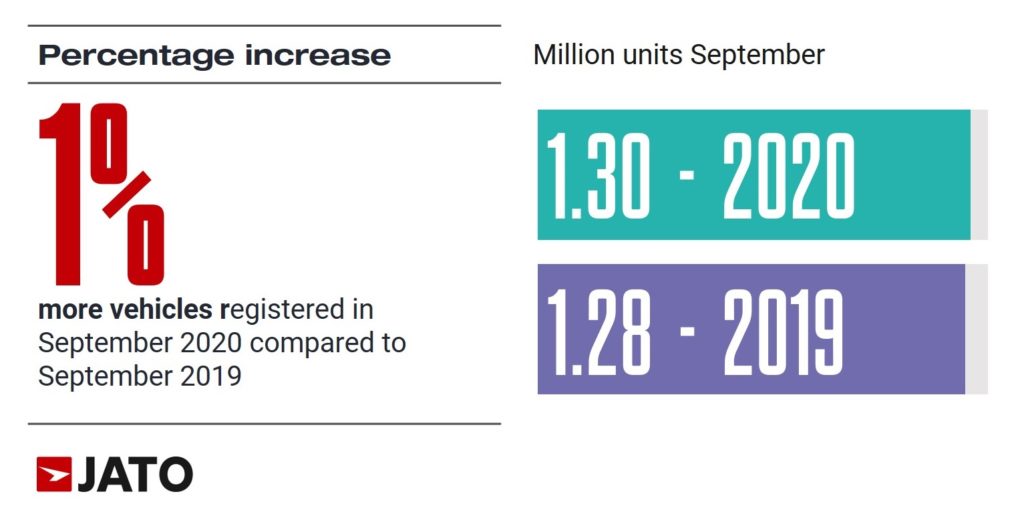 2020 has been a turbulent year for the car market globally, and particularly in Europe. Although car registrations dropped by 29% during the first nine months of the year – to 8.54 million units –there are clear signs that Europe is all set for an electric revolution. In fact, according to JATO’s figures for September 2020, this revolution has already started.

ATO Dynamic’s data for 27 markets in Europe shows that the total number of electrified cars registered in September (encompassing pure electric, plug-in hybrids, full hybrids and mild hybrids) was higher than the number of registrations for diesel cars. For the first time in the modern era, alternative-fuelled-vehicles outsold one of the two internal combustion engine (ICE) types. This marks significant change – for just five years ago, diesel cars were a dominant player in Europe.

Whilst overall the market posted a timid growth of a mere 1.2% in September, to almost 1.3 million passenger cars, the mix by fuel type signals big differences in growth rates. Demand for gasoline and diesel cars shows double-digit drops compared to September 2019 while the volume of EVs increased by 139% to 327,800 units – a record in terms of both volume and market share. This is the first time that EVs have broken the 300,000 units monthly mark, and only the second time that they have counted for more than 20% of registrations.

At the same time, the diesel market share posted a record low, of only 24.8% in September. Exactly a decade ago, diesel cars comprised 50% of registrations, while the market share for EVs was below 1%.

Felipe Munoz, Global Analyst at JATO Dynamics commented: “The shift from ICEs to EVs is finally taking place. Although this is largely down to government policies and incentives, consumers are also now ready to adopt these new technologies.”

This changing landscape is favoring some OEMs more than others. For example, the Volkswagen Group has successfully managed to overcome the diesel-gate scandal of 2015, to become a new protagonist in this chapter of vehicle electrification. Last month, the German car maker registered 40,300 electrified vehicles in Europe, becoming the second largest EV seller behind only Toyota – and its continued dominance from within the hybrid segment. “Like with its SUVs, Volkswagen Group arrived late to the EV boom, but its competitive products are catching up quickly, and it is now becoming a leader” Munoz said.

The market landscape of hybrid vehicles

Last month, hybrids and mild hybrids represented 53% of total EV registrations, with their volume growing by 124%. Toyota and Lexus dominated, as usual, with 32% market share – but further growth was driven by Ford, Suzuki, Fiat and BMW. In addition to the strong results of numerous Toyota models, volume was also boosted by the popular Ford Puma (69% of its volume corresponded to the mild-hybrid versions), the Fiat 500 and the Fiat Panda (whose hybrid version counted for 59% and 41% respectively).

Volkswagen is the leader of the BEV market

Pure electric car demand was led by Tesla, although its volume fell by 5%, while its closes rivals such as Volkswagen and Renault saw increases of 352% and 211% respectively. If we look across all car makers, then Volkswagen Group is now Europe’s top-selling BEV maker, ahead of Tesla. In September, Mercedes-Benz was the leader in the plug-in hybrid segment with 22% market share, followed by Volvo and BMW.