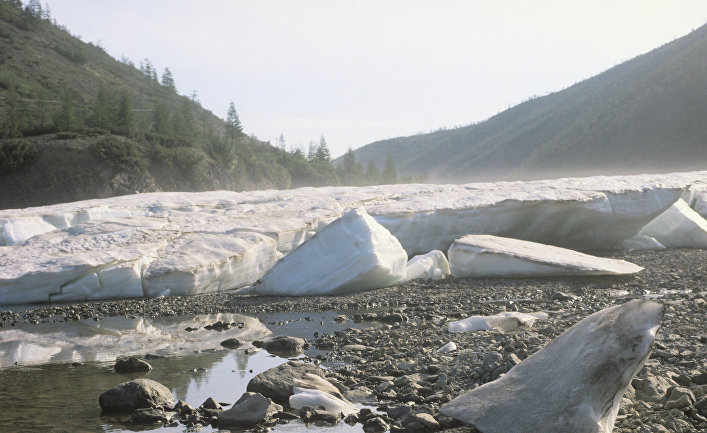 I hate this landscape, “says a continuously smoking man with long gray hair hidden under his beret.

The man is standing on a barge that floats along the Kolyma River, which flows into the Arctic Ocean. On the banks of the endless ribbon are low and difficult to traverse larch forests.

These landscapes could be called a virgin nature, but the world-famous Russian ecologist Sergei Zimov calls them the consequence of an ecological catastrophe, which the man provoked.

“In that forest you will not find a single large wild beast, because there is nothing to eat. Before the arrival of man, neither forests nor moss grew here. I want to destroy this forest. ”

In the destruction will take part and ten yaks, who calmly chew hay in a container. Yakis are bought by the crowdsfinding company Kickstarter, and they have been on the road from the Mongolian border to the polar Siberia for three weeks already.

The barge is Noah’s Ark of Sergei, a step towards fulfilling the great mission of Zimov. He wants to gradually restore the Siberian northern savanna and, with the help of large herbivores, turn it into a steppe, where grass grows and there is hay.

The theory of Zimov was outlined in 2015 on the pages of the Helsingin Sanomat, devoted to science. This is what it consists of: large herbivores themselves support the pastures and ecosystems they need. Since animals eat a lot of grass and trample down the surface of the earth, trees and shrubs do not grab territory. When producing manure, animals quickly start the turnover of nutrients.

The steppes of Siberia were covered with forests, when mammoths and other large animals disappeared.

This period is reminiscent of a fertile loess layer 25 meters thick, which remained under the upper layer of the soil. Loess is in permafrost, which in these places goes to a depth of 600 meters.

The tug pulls the barge up the tapering tributary of the Kolyma River and pushes it out onto the bushy shrubbery.

We are in the Pleistocene Park, which Zimov founded here in the forest-tundra 20 years ago.

The purpose of the park is to try to turn the forest into a steppe in practice. The Pleistocene is a glacial epoch, during which half the surface of all the continents was a pasture for herbivores.

A wobbly bridge is thrown from the barge to the shore, but the yaks do not understand that they have already arrived at the place. When the doors of the container are opened, yaks have to be lured out of it. Sergei’s son, 37-year-old Nikita Zimov, takes the most timid yak on the bridge by the horns.

For animals a small clearing is cut off, on which they should have enough food for a day.

“These are the first yaks that appeared beyond the Arctic Circle after 14 thousand years,” says 62-year-old Zimov proudly.

In June, it is difficult to get a complete picture of the Pleistocene Park, because most of the meadows are flooded with water.

On the hummocky terrain the swamp goddess is still growing, but grass is already breaking through. Her pinched, and here and there are heaps of dung – there is life.

“Oppoppo”, – calls the cattle breeder Slava Moiseev, and a herd of reindeers of 20 heads runs towards him.

Then a lone, unfriendly bison, chewing leaves, comes to meet.

According to Nikita Zimov, at present more than 80 animals are grazing in the park: reindeer, moose, hardy Yakut horses and three musk oxs.

The newest pet is a small calf brought by hunters, whom Slava Moiseev drinks from a bottle with a pacifier.

The influence of animals, in the opinion of Zimov, is obvious.

“Fifteen years ago there was an impenetrable forest here. The grass begins to grow immediately, as soon as the surface of the earth is damaged. The soil dries and compacts, because the grass requires a lot of water. Oxygen penetrates deeper. ”

Zimov does not rely solely on the help of animals, but destroys the forest itself with the help of crawler-mounted machinery.

Mammoth steppe must be returned, because it is a question of a person’s duty to nature. Disappearance from Siberia of mammoths, bison and woolly rhinoceroses occurred not because of climate, but as a consequence of human activity.

However, the project has another task: slowing down the process of climate change.

Zimov calculated that 500 gigatons of carbon are in the permafrost, 2.5 times more than in the tropical forests. If permafrost begins to melt, carbon dioxide and an even stronger greenhouse gas methane will be released into the atmosphere.

According to Zimov’s opinion, the prevention of melting of permafrost is possible with the help of large herbivores.

In winter, animals eat branches and dig out grass from under the snow. In doing so, they trample down the snow, and it does not protect the ground from freezing. The earth, according to Zimov, on the pastures freezes more than in the forest. In summer, the grass is lighter than the forest and moss and collects less solar radiation.

In the pursuit of Zimov there is a contradiction, because in the return of the mammoth steppe, he partly counts on the warming that he tries to prevent.

It shows an experimental plot on which the forest has been cleared, and the top layer of the soil has been removed by an excavator. The ice veins of the permafrost melted, deep dips formed, and loess was exposed.

If the landscape recovers, the process of recovering the steppe will accelerate.

To start, you need a network of parks, several thousand animals, such as buffalo, horse, musk ox, snow sheep and antelope. According to his calculations, a square kilometer of the steppe can feed 20 large herbivores and a couple of predators.

As a result, you can talk about millions of animals. According to Zimov’s calculations, there would be enough space in Russia for 300 million large herbivores.

“This is not a utopia. In recent years, Russia imported from abroad a million head of cattle. ”

Since Russia has huge amounts of permafrost carbon and most of the unused land, Russia can, according to Zimov, decide the fate of the world.

Zimov’s offspring is the North-East Scientific Station, located 45 kilometers from the park, which actively cooperates with Western scientists, including Finnish scientists. His theory was presented by Zimov in the publication Science.

Unlike typical Western researchers, he is not afraid to speak out and actively develops his hypotheses.

For the future of mankind, Zimov looks gloomy.

“This is a civilization of non-renewable natural resources. Metal is extracted already from a depth of three kilometers. Oil production only increases. The soil is depleted. When resources run out, the collapse of modern civilization will quickly come. Then on the globe will live much less people. ”

It would be good to prepare for this by developing self-regulating ecosystems.

For 20 years, the number of animals in the Pleistocene Park has not increased. Because there are few animals, pasture formation is slow. In winter, animals have to be fed.

According to Zimov, almost half of the animals brought in die in the first year. The Bison killed a calf, the bears – horses, and the wolverine – the reindeer. The horses fell, eating a poisonous milestone. Three animals died from mosquito bites. Part did not survive the winter.

Now the park still celebrate a happy family event: the yak, brought on a barge, has a posterity.

“We were assured that among them there are no stellates,” Nikita Zimov marvels.

The calf hides under the mother and sucks milk. For four days the corral was completely trampled and gnawed. We took a step closer to implementing the theory.