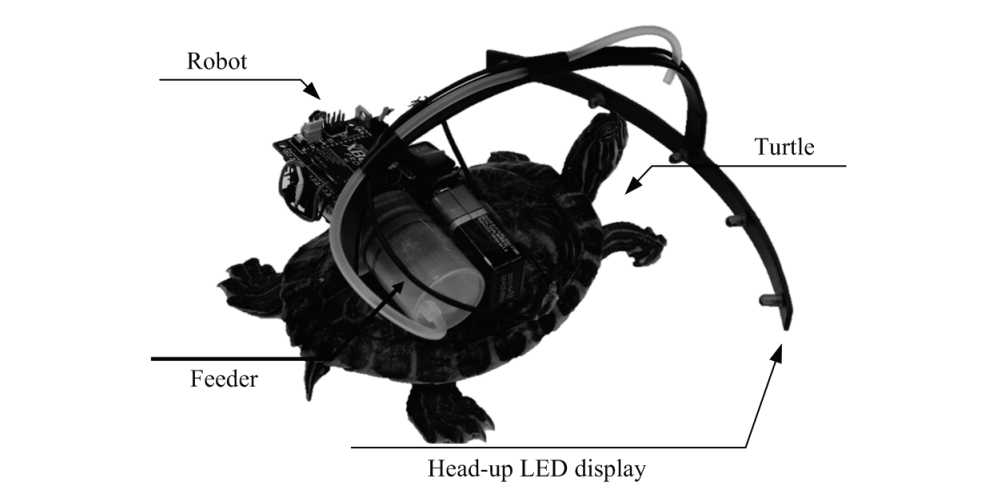 Despite the development of robotics, existing models of robots have a number of shortcomings. So, in conditions of high humidity, their sensors and actuators can be damaged, in addition, the stock of batteries for such devices is finite. To deliver robots to hard-to-reach places, scientists are considering the possibility of using animals. In 2016, the staff of the Korea Institute of Advanced Technology (KAIST) and the Singapore Infocommunication Research Institute introduced a method that allows an operator to remotely control tortoise movements through a neurointerface.

In the framework of experiments, a stimulating device and a video camera were attached to the carapace of the animal. With the help of mental commands transmitted over Wi-Fi, the operator could rotate the black half-cylinder with a slit along the reference plane, partially covering the reptile’s view. Since, according to past experiments, the latter perceive black as an obstacle, their direction of motion changes. In the new article, scientists described a management system that does not provide for operator involvement. Based on the principles of parasitism, it consists of three modules: control, stimulation and reward. 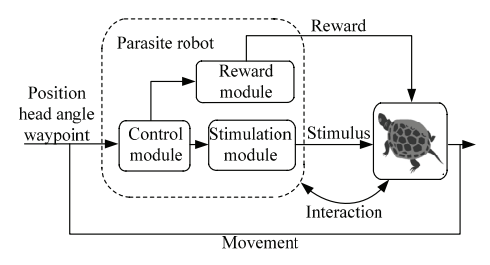 Principle of operation of the system / © Dae-Gun Kim et al., The Journal of Bionic Engineering, 2017

For stimulation, the authors used four LEDs, attached to a semicircular frame in 30-degree increments at eye level of animals. Activation of the LED should indicate the direction of motion, while the radio modem and microcontroller checked the target trajectory with the angle of rotation of the head and the movement of the turtle. Provided that the latter corresponds to the system command, a gel-like food was squeezed into the mouth of the reptile by means of a motor and a syringe. All modules were attached to the shell by means of epoxy resin. The technology was tested on five individuals in a reservoir of water.

Under the experimental conditions, the animals had to consistently cross five points with a total distance of five meters. The results showed that the “robot-parasite-turtle” system allows to successfully control the movement of reptiles, despite the fact that on average, the distance traveled by them exceeded the target distance – about 7.18 meters. According to the researchers, the presented approach can be extended to other animals, including fish or birds. It is assumed that the system can be used for reconnaissance or surveillance in hard-to-reach areas.

In future works, the authors intend to test the technology in natural conditions and improve it, in particular to reduce the impact on animals of external factors: the ultimate goal is stated to fully concentrate the individual on the system’s commands. In addition, in the future, the robot parasite can be further developed taking into account possible obstacles and constructing optimal routes. Meanwhile, earlier American scientists published a protocol for the creation of miniature biorobots, which are driven by the impact on modified myoblasts. Anyone can use the document.