In space Fermi bubbles discovered a gas of a different origin 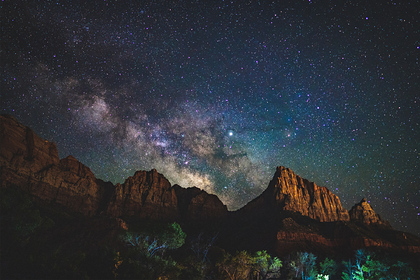 US astronomers have discovered that the chemical composition of some of the gas clouds in the cosmic Fermi bubbles does not match the chemical composition at the center of the Milky Way. This indicates that some of the material in the bubbles that astronomers attribute to ejections from the supermassive black hole Sgr A* comes from a different source, and the clouds themselves have a dual origin. The results of the study and findings are published in the journal Nature Astronomy.

The scientists analyzed data obtained from observations of high-velocity Fermi bubble clouds (FB HVC) using various instruments and telescopes. FB HVCs are gas clouds that move at great speed inside the Fermi Bubbles, giant structures above and below the plane of the Milky Way. Fermi bubbles were first discovered by the Fermi Gamma Ray Space Telescope, which recorded extended globular regions of gamma rays on both sides of the Galaxy. This radiation is believed to be produced by the interaction of high-energy particles released by a supermassive black hole with gas and dust in the Milky Way’s halo.

Clouds of cold gas inside Fermi bubbles are observed in the radio, ultraviolet and optical ranges, and the models are consistent with the assumption that they move under the influence of the stellar wind from the galactic core. Although all FB HVCs were thought to be composed of material ejected from the central regions of the Milky Way’s stellar disk or directly from the black hole’s vicinity, little was known about their metallicity until now.

. The results of the new study show that the metal content of the 12 clouds varies greatly, ranging from 20 percent to 320 solar metallicities.

This is at odds with the widely accepted notion that all FB HVCs originate from that region of the Fermi bubbles that encompasses the part of the galactic center where the metallicity is comparable to or exceeds that of the sun. Instead, the authors suggest that the material of some of the clouds could come from more distant regions of the Galaxy, for example, from the stellar disk of the Milky Way and the galactic halo.

. In other words, a single population of clouds comes from the environment into which the Fermi bubbles expand, and does not consist of material thrown outward by the wind from the galactic core.

It is known that powerful outflows of gas and matter from the nuclei of galaxies prevent clouds of cold gas from penetrating into the stellar disk, which in the end can completely stop the processes of the birth of new stars. Fermi bubbles are unlikely to be strong enough to “extinguish” the Milky Way, scientists say, but they can be used to study how flows from black holes can interact with halo material. Earlier, Lenta.ru wrote about modeling various scenarios for the origin of Fermi bubbles and their connection with high-energy jets of the supermassive black hole Sgr A*.