In Sweden, a farmer finds a huge runestone in a field 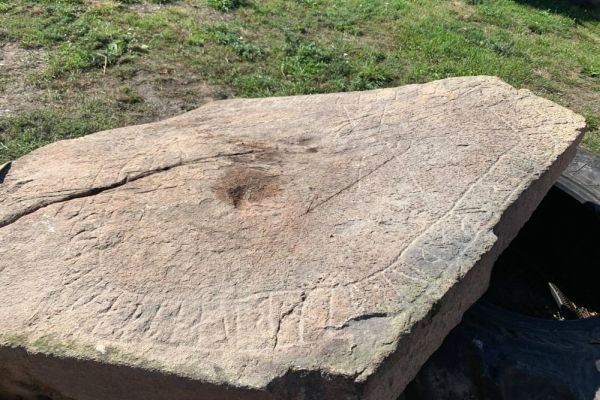 In Sweden, a farmer named Lennart Larsson, while working in the field on his farm in the village of Hellere, near the city of Loftahammara in the southeast of the country, accidentally discovered a huge stone with ancient runes.

According to The History Blog, the discovery was made several years ago. True, the farmer himself did not even know about this, since only recently he showed his find to experts.

The farm tractor literally crashed into a huge stone while working in the field. This boulder is about two meters long and about a meter wide. The stone turned out to be flat, and the farmer decided to keep it and use it in construction.

Larsson dragged him to the edge of the field with a tractor and forgot about him for a while. The farmer has recently started building a new staircase. He decided that a flat stone would be an excellent foundation. A farmer lifted a stone with an excavator. It was then that he first noticed some signs carved on the underside.

The farmer turned to the Westerwick Museum. Experts arrived at the site and examined the stone. The signs turned out to be ancient runes, and the boulder itself was a rather rare runestone. Runes expert Magnus Kellstrom was able to decipher the inscription.

It reads: “Gardar erected this stone for Sigdjarv, his father, husband of Ogard.” A cross was also carved in the center of the stone. Together with the inscription, it indicates that it was a burial stone, a tombstone. It was probably installed on the grounds of a family farm. By the way, the village cemetery was located several kilometers from this place.

Another feature of the runestone is that a certain zoomorphic figure was depicted around the text, biting its own tail. According to the rounded style of carving, scientists have established that the inscription was made in the first half of the 11th century.

According to archaeologists, the stone has lain in one place throughout its history. It is in very good condition, despite the fact that the field has been plowed over it for centuries. For archaeologists, this boulder is also of great value because the inscription mentions the names of three people from different generations of the same family.

What makes the find even more intriguing is that the female name “Ogard” mentioned in the text has never been encountered by researchers before. By the way, scientists suggest that the stone belonged to a very famous and wealthy family. Earlier in the same region, silver coins and a silver sleeve were found dating from the 11th century. These findings clearly speak of the family’s wealth.