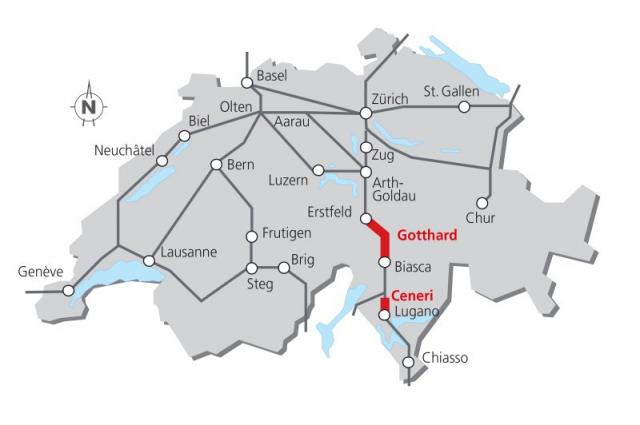 In Switzerland, the official opening of the world’s longest railway tunnel. His length was 57 km, the Gotthard base tunnel will reduce the journey time between Zurich and Lugano 45 minutes to 2 hours.

Plans to create a tunnel appeared in the 1980s, but construction began only in 1996. The cost of the project amounted to about 11 billion euros. The structure can also be called one of the most expensive tunnels in the world. Regular service is scheduled to open in December 2016.

The Gotthard base tunnel runs under the Alpine peaks whose height is more than 2.3 km away. unlike its predecessor, the old Gotthard railway tunnel, built in 1882, the new tunnel is not built on high altitude.

Trains in Gotthard tunnel, will follow with a maximum speed of 250 km/h Every day through it can pass 260 freight trains. The bandwidth of the old tunnel was 180 trains per day.

The Gotthard base tunnel was 3 km longer than the previous record – seikan tunnel, connecting the two Japanese Islands of Honshu and Hokkaido. New on the tunnel 7 km long tunnel under the English channel. Currently, China plans to build a tunnel under the Bohai Gulf. The length of this structure should be 123 km, which is two more than the length of the Gotthard tunnel.

In addition to the Gotthard tunnel in Europe, plans to build several more such facilities. Another tunnel with a length of 55 km will connect the Austrian Innsbruck and the Italian Bolzano. Another project is a railway tunnel that will connect Helsinki and Tallinn, also is waiting for approval.