In the amber, a bird is found that is 99 million years old 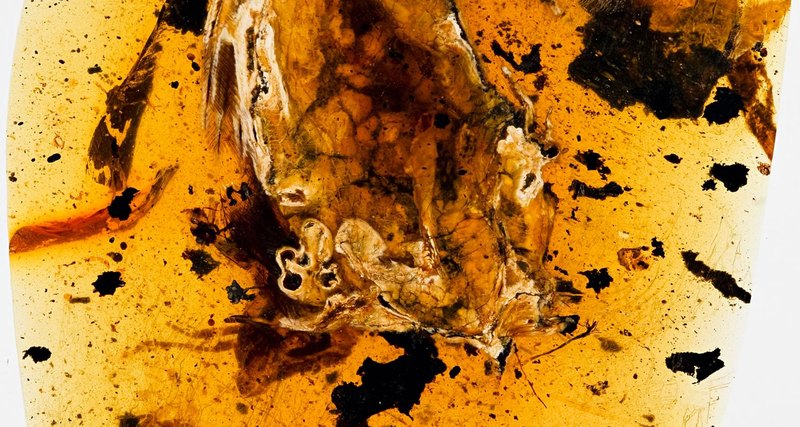 In the north-eastern part of Myanmar (formerly Burma), on the border with China and India, there are huge deposits of amber, called birmit. Its color varies from yellow to brown, and he is known for more than two thousand years: Chinese masters used it for jewelry and handicrafts.

These fossil resins are even more important from a scientific point of view: they often find the remains of animals frozen in antiquity. On such drops of amber there is a huge demand among collectors, so the cost of fragment with remains can reach up to 500 000 US dollars. This leaves scientists with no material for study, and the more valuable are several recent discoveries: last year specialists managed to get amber, in which a prehistoric chick froze, and now paleontologists told about a second sample containing an ancient bird.

Unfortunately, the remains are missing legs, some fragments of the skull and wing. However, they also open unique opportunities for research: the fact is that the resin covered the bird too slowly, and some of its tissues had time to fade. As a result, a flat pattern (scientists called it “pancake”) demonstrates anatomical details.

A 6-centimeter bird from the Enantiornis group (Latin Enantiornithes), which lived more than 99 million years ago, looks like a hummingbird. The name of the group, which translates as “the opposite of birds,” is given for an unusual morphology: almost every element of their skeleton was arranged differently than the fan-shaped (Latin Neornithes), which include modern birds. In particular, not only feathers but claws were located on the wings of enantihornal birds, and there were almost no feathers on the body. But they had teeth and were predators. The structure of their wing, tail and shoulder section is so different from the usual that scientists still do not exactly understand how the enanciornis could fly. Thus the structure of feathers of fossil birds is close to the modern one. The study of a unique specimen continues.