In the blood of Komod dragons found a powerful antiseptic 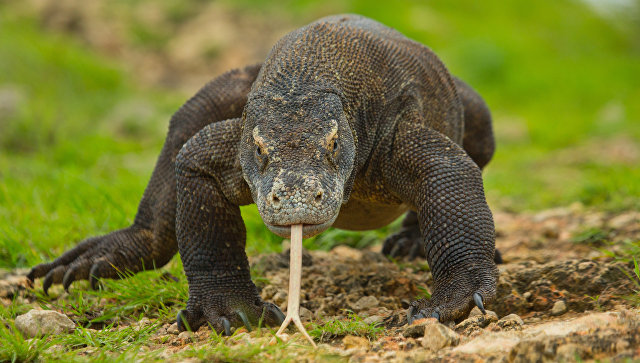 Biologists found in the blood of Komodo lizards an unusually powerful antiseptic that kills many dangerous bacteria, including some invulnerable “super-microbes” resistant to antibiotics.

“This substance is more than just an antiseptic or antibiotic – the VK25 protein and its synthetic analogue DRGN-1 not only kill many different microbes, but it helps to tighten the wounds, stimulating the growth of skin cells and destroying bacterial films. This protein can be used as the basis for a cream for the treatment of wounds, “- says Monique van Hook (Monique van Hoek) from the George Mason University in Fairfax (USA) and her colleagues.

Komodo lizards (Varanus komodoensis), or “dragons”, as they are called by the locals, are the largest species of lizards on Earth, crushing the heirs of the giant three-meter mega-varanas of Australia, which were fought by the first aborigines of the southern continent. Varans are among the ten most popular reptiles of the planet, not only because of their size, but also the manner of hunting – they use a kind of “biological weapon” for catching lunch.

The saliva and mouth of the lizards, as the biologists discovered about a decade ago, contain a whole bunch of various deadly bacteria that cause sepsis and gangrene when ingested by humans or animals. Some scientists, however, dispute such an opportunity, considering that microbes fall into the saliva of the lizards accidentally, along with the scavenger they eat. In any case, these bacteria, despite their danger, do not interfere in any way with the life of the predator itself, which made Van Hook and her colleagues, as well as many other scientists, search in the blood of the lizards and in their saliva, substances that protect them from microbial attacks.

To find such secrets, the Van Hook team several years ago developed special nanoparticles that allow them to “catch” different proteins from blood or cell samples, multiply them and study their structure. Using these particles, two years ago Van Hook and her colleagues found four dozen antiseptic proteins in the blood of the alligators, and now they have checked their work on the lizard.

It turned out that the blood of the lizards contains the only, but very powerful, antiseptic protein VK25. This substance, as shown by experiments in mice infected with various types of dangerous microbes, can destroy several types of pathogens at once, weakening their cell walls and destroying the bacteria films formed at the edges of the wound.

In particular, VK25 successfully destroyed colonies of Staphylococcus aureus, Pseudomonas aeruginosa, bacterium “killer” Burkholderia thailandensis, which kills a person in 24 hours, as well as pathogens of tularemia and a number of other dangerous diseases.

In addition, this substance has another useful property – it stimulates the migration of skin cells and thereby accelerates wound tightening even in cases when there are no microbes and associated inflammatory processes.

Having discovered such an interesting substance, scientists tried to make it even more effective by introducing random mutations into the structure of the VK25 protein. The product of these efforts was the creation of DRGN-1 substance – a more effective synthetic version of VK25, differing from the progenitor by only two amino acids.

In the near future, scientists plan to check whether DRGN-1 will suppress four other dangerous microbes that infect wounds, and begin pre-clinical tests in rats and other animals.