In the bones of dinosaurs can be preserved organics 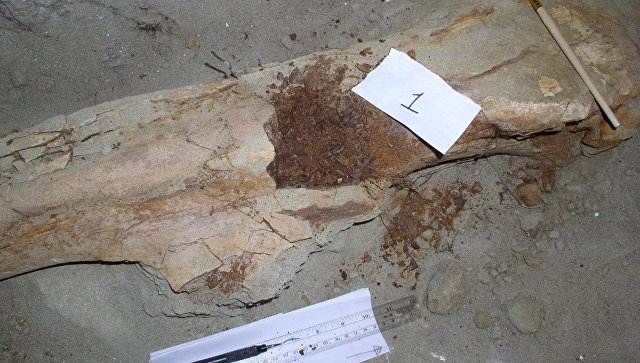 Paleontologists from the United States again found traces of collagen and other proteins within the fossilized bones of a dinosaur, which confirms the possibility of saving the traces of organic matter at least for 80 million years.

“Technology, mass spectrometry and protein database has improved markedly since the publication of our first article on this subject in 2009. We wanted not only to dispel the questions that have accumulated over this time, but to show that these bones can and re-find traces of the same proteins with an almost guaranteed chance,” said Elena Schroeter (Schroeter, Elena) University of North Carolina in Raleigh (USA).

In 2009 the world had spread the news about a surprising discovery – scientists were able to find traces of the protein molecules in the bones of brachylophosaurus, a large hadrosaur that lived in the U.S. about 80 million years ago. No one had ever suspected that they can persist for such a long time, and the authors of this discovery was immediately accused sensationalism, forgery of results and other scientific “sins”.

The fact that simple calculations show that the protein molecules remain stable for about one and a half million years, after which all trace of them should be solved forever from fossilized animal bones. Therefore, scientists believed that the survival of protein for 60 to 80 million years is an invention of the authors of this discovery.

Subsequently, other groups of scientists have made similar discoveries, finding traces of collagen, a protein connective tissue, in the bones of T. Rex and other ancient dinosaurs, and even traces of red blood cells and bone remains of several kinds of ancient giants.

Schroeter and her colleagues decided to prove that the first discovery of proteins was not a Fluke and that it really happened, using new methods of search of amino acids inside the fossilized bones of matter and accumulated over the past years, information about the structure of proteins and how they decompose.

For purity of experiment, how to tell the scientists, they analyzed not only the bones of brachylophosaurus, but about one meter of rock, surrounding it, using the highest standards of biological containment in the analysis of the bones in the lab.

Re-analysis of the bones has not only confirmed that the fragments of collagen that scientists found in it eight years ago are actually present in the remains of brachylophosaurus, but also showed that they have six other fragments of the protein that paleontologists had not found previously in these fossils.

By combining these segments and analyzing their structure, the scientists came to the conclusion that the collagen brachylophosaurus was very similar in structure to similar molecules in the body birds and crocodiles. This similarity, as noted by Schroeter, is another proof that proteins are indeed preserved inside the bone, and not accidentally fell into the samples as a result of contamination or impregnation glue.

The re-discovery of proteins and the discovery of new molecules, as scientists believe, opens a whole new field of science – paleontology protein. According to the authors, the search for and study of traces of proteins in the bones of ancient creatures may help us understand how they were connected, and uncover the mysteries of evolution, which “naked” bone is not able to tell us.