In the bones of dinosaurs of the Jurassic period discovered Organika 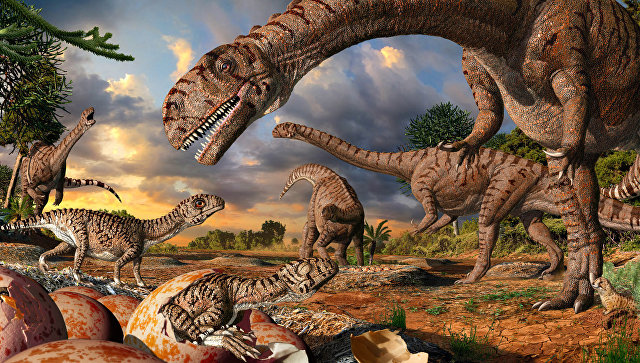 Scientists first found evidence of proteins in the bones of the dinosaur age in 195 million years, demonstrating the possibility of maintaining organic matter and other traces of life since the Jurassic period.

“Fossils in recent years have become not only a source of unique biological and evolutionary information, but also potential key to the study of the genomes of long-extinct organisms. We found traces of protein in the blood vessels inside the bones of a dinosaur-sauropods that lived 195 million years ago,” says Robert Reisch (Robert Reisz) from the University of Toronto in MISSISSAUGA (Canada).

In 2009 the world had spread the news about a surprising discovery – scientists were able to find in the bones of brachylophosaurus, a large hadrosaur that lived in the state of Montana in the United States, approximately 80 million years, traces of protein molecules. No one had ever suspected that they can persist for such a long time, and the authors of this discovery was immediately accused sensationalism, forgery of results and other scientific “sins”.

Subsequently, other groups of scientists have made similar discoveries, finding traces of collagen, a protein connective tissue, in the bones of T. Rex and other ancient dinosaurs, and even traces of red blood cells and bone remains of several kinds of ancient giants. So no doubt that proteins can survive for millions of years, gradually began to dispel.

Reisch and his colleagues have found a new example of such a biological “echo” of the prehistoric ages, and uncovered a possible mechanism for the preservation of proteins by studying the remains of the so-called lufengosaurus is a large herbivorous dinosaur that lived in Asia at the beginning of the Jurassic period. They are the sauropods that are close relatives of the Diplodocus, but they had little resemblance to them – lufengosaurus was able to walk on two legs, had sharp claws and would be expected to be omnivores.

A large number of remains of these dinosaurs team, Risa found three years ago during excavations of a whole “graveyard of eggs” lufengosaurus in Yunnan province. Here overlie rocks of the formation, Lufan formed in the early Jurassic period, 197-190 million years ago.

Trying to find traces of protein and blood in the remains of these dinosaurs, scientists to enlighten several ribs of lufengosaurus with the help of a particle accelerator and x-ray microscopes. This allowed them to look in the smallest blood vessels inside the fossilized bones of ancient reptiles and analyze the chemical composition of their contents without opening the edges.

As the scientists explain, the collision of a beam of x-waves with the molecules of proteins and residues of hemoglobin produces infrared radiation at certain frequencies by absorbing that, you can understand, there is organic matter inside the bones and even to determine its composition.

Message in a bottle bone

When paleontologists found traces of hypothetical proteins in several bones of lufengosaurus, they cut small pieces and tried to remove the “scraps” of protein molecules from them. This procedure was successful, and Reisch and his colleagues have obtained the first unambiguous and 100% “pure” samples of the collagen of the Jurassic period.

In total, the scientists were able to distinguish five short fragments of collagen that form key elements of a long protein molecule. In addition, the authors found a large number of crystals of hematite microparticles of iron oxide formed inside the bones of a dinosaur in the result of the accumulation and destruction of a large number of red blood cells.

These cells and hematite, as scientists believe, has played a key role in protecting proteins from degradation. According to them, stuck “weight” of red blood cells and crystals of iron oxide played a role of microprobes, zakuporivavshih vessels in the first days after the death of the dinosaur and defended immured between protein molecules from oxidizing agents and other corrosive molecules during the formation of fossils. This idea of discoverers of proteins in the bones of dinosaurs were already tested in practice by experimenting on ostrich bones and blood cells, and now she found confirmation.

If so, then there is a nonzero probability that other forms of organics can, in principle, persist in the bones of dinosaurs and even more ancient creatures. Of course, their discovery will lead to the creation of “Jurassic Park” in reality, but they will help scientists to clarify the ancestry of the ancient giants and to better understand how they lived and what they looked like.