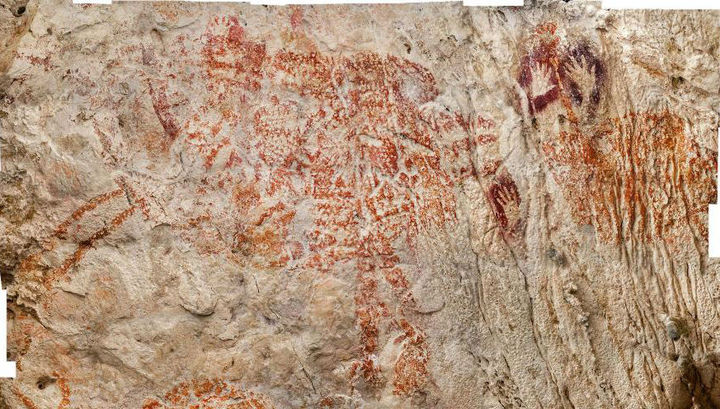 An international team of scientists found out when the images of the mysterious beast were discovered, which was discovered in the cave of Borneo. Recall, this is an island in southeast Asia. Ancient artists painted an animal resembling a wild cow about 40 thousand years ago. As experts say, this is the most ancient animal pattern known today.

Apparently, in the cave depicted banteng (Bos javanicus), which can still be found in Borneo.

“Initially, people created figurative drawings of large animals, and only then they began to depict the human world,” explains one of the authors of the work, archaeologist Maxime Aubert from Griffith University, Australia.

The oldest work of art adorns the walls of a limestone cave in the Indonesian province of East Kalimantan. Researchers have known these figures since 1994. Meanwhile, scientists have only recently found out when they were created, adds Aubert.

The research team collected samples of calcium carbonate, which is part of the cave drawings, to establish their exact age. For this purpose, they used the method of dating based on thorium and uranium (uranium – thorium dating).

Briefly explain the essence of technology. When rainwater seeps through limestone, it carries a small amount of uranium, Ober explains. As it decays, uranium (a radioactive element) turns into thorium. By studying the ratio of uranium and thorium in calcium carbonate (limestone), researchers can determine the age of rock art.

“Uranium is radioactive and eventually decays, causing another element to be created, thorium. The decay rate is precisely known. The key is that uranium is soluble in water, but thorium is not. Thus, when over the picture because of rain water forms a calcite coating, it initially contains uranium, not thorium. If you take a sample after thousands of years and measure the ratio of uranium and thorium, you can calculate the age of the coating, ”the scientist says.

A layer of calcite on the top layer of the picture shows the minimum age of the picture, and the layer under it gives an idea of ​​the maximum age, the author adds.

It turned out that the most ancient figurative image of a mysterious beast is at least 40 thousand years old, Ober sums up.

Previously, the image of babirus, or deer pig, was considered the oldest animal pattern. His age was estimated at 35,400 years. The image was found on the Indonesian island of Sulawesi (authors of the project “Vesti. Science” (nauka.vesti.ru) told about this find).

Experts believe that various ancient works of art in East Kalimantan were created over three periods. 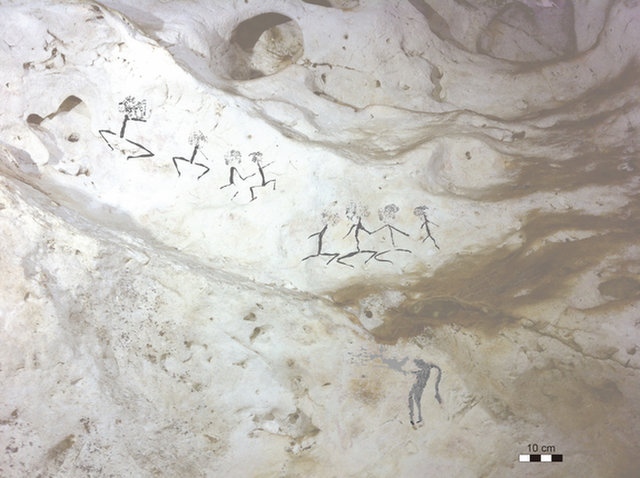 During the second phase, a noticeable change in culture is observed; it falls on the period of the last glacial maximum, approximately 20 thousand years ago. The result is a new style of rock art: now artists focus on the human world.

The ancient “creative people” are beginning to prefer the dark purple color, they draw abstract signs and human-like figures wearing complex hats. In addition, you can see scenes of hunting and ritual dances.

Scientists do not yet know whether the different types of cave art belong to the hands of two different groups of people, or whether they represent the evolution of a particular culture. “We are planning an archaeological dig in these caves to get more information about unknown artists,” says Aubert.

The third phase of the rock art is characterized by humanoid figures, boats and geometric figures, painted mainly with black pigments.

A similar type of art is found in other places in Indonesia. It can originate from Asian neolithic farmers who arrived in the region about four thousand years ago, the authors say.

As scientists assume, figurative cave paintings were created in south-east Asia at the same time as in Europe.