In the depths of a French cave discovered Stonehenge Neanderthals 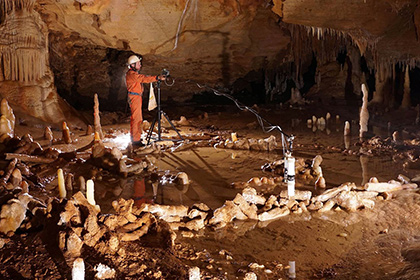 In the depths of the cave Bruniquel in the South-West of France, in the dark, scientists have discovered an unusual structure — circles of the stalagmites, part of which was ripped and built like a stockade. It the discovery was made in the early 1990-ies, but only now scientists found that the rings were built by Neanderthals. These “primitive” people as it turned out, were capable of creating complex structures with artificial light another 175 thousand years ago. About the discovery reported in the journal Nature.

At a depth of 330 meters found placed in a certain way a handful of stones and two wide rings (about 2.2 and 6.7 meters in diameter). And heaps, and rings are composed of approximately 400 stalagmites of the same size. They specifically split so that to achieve the desired length — so, some chipped and stalagmites the top and bottom.

The size of the rings and a neat location the stones leave no doubt that these structures was in the hands of people, and not bears, suiting a rookery. Using the radiocarbon method of Dating the researchers found that the rings arose 175-177 thousands of years ago. Since the ancestors of modern humans had not yet reached from Africa, the ring could only be built by Neanderthals.

While scientists have not found the “workshop”, where stalagmites have fought off the tips. However the main mystery is the function of these structures. Judging by the charred the stones and the piece of bone, the ancient inhabitants of the cave there was kindled a fire, and then cooked (or sacrificed). Scientists admit that ring of stalagmites was performed for religious or ceremonial function speaking on the prototype of Stonehenge.

This finding is the first definitely dated proof that Neanderthals could to build complex structures. It is likely that similar structures (from wood, bones or animal skins), they elevated not only in caves, but their traces have long since disappeared.