In the depths of the Earth, new lithospheric plates have been found 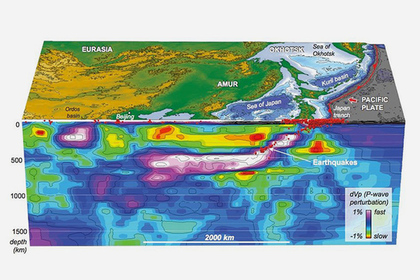 Geophysicists from the US and China presented preliminary data on the presence in the bowels of the Earth an additional layer of lithospheric plates. A corresponding study was reported at a joint conference in Tokyo (Japan) organized by the American Geophysical Society and the Japanese Society for Earth Sciences, the Guardian reports.

Tectonic plates can be located in the layer of the upper mantle at a depth of 410-660 kilometers under modern Japan, North and South Korea, Northeast China and the Pacific Ocean stretch all the way to the Fiji islands. In the depths, according to scientists, from the earth’s surface lithospheric plates fell about 50-60 million years ago as a result of subduction – the immersion of one lithospheric plate under another.

Tectonic plates located in the bowels of the planet, as geophysicists note, are responsible for some deep and strong earthquakes in the Pacific Ocean, in particular, between the islands of Fiji and Australia. Subterranean tremors occur, in the opinion of the authors, due to subduction in the transition zone (upper mantle).

Experts say that about 90 percent of deep earthquakes (with a hypocenter, that is, the source of an earthquake below 500 kilometers) on the planet falls on the area of ​​the islands of Tonga in the Pacific Ocean. Scientists believe that the reason for this is a flat, long plate immersed in the mantle.

Geophysics came to their conclusions using mainly seismic tomography methods, which allow using sound waves to study the distribution and motion of matter in the bowels of the Earth. Specialists presented a three-dimensional computer reconstruction of events that occurred 50-60 million years on the planet and led to the formation of a modern layer of lithospheric plates under the Pacific Ocean.

Scientists’ assessments, in particular, show that the lithospheric plate in the upper mantle in the area under the Tongo Islands for the last 15 million years has moved transversely to the west at an average speed of about five centimeters per year.

Specialists note that a number of plate tectonics provisions as a result of new research can be refined or even revised. The work of the authors has not yet been published in the peer-reviewed scientific journal.

The Earth is considered the only known planet in the solar system with full tectonic activity. The beginnings of tectonics scientists found on Mercury, it is not on Venus, probably, tectonics in the past could have been on Mars. Planetologists have still found similar to terrestrial lithospheric structures so far only in celestial bodies with under-ice oceans (in particular, on Europe – the satellite of Jupiter).