In the Egyptian tomb found the oldest cheese 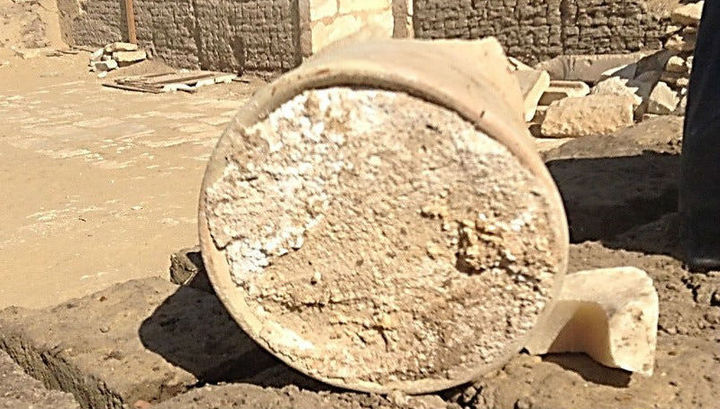 In 1885, near the village of Sakkara (Egypt) in the necropolis of the city of Memphis – the capital of the Ancient Kingdom – was found the tomb of a high-ranking grandee from the reign of the 19th dynasty of Ptahmes. The tomb was erected in the 13th century BC. It is believed that Ptahmes could be an adviser at the court of Pharaoh Seti I and his successor Ramses II.

The first excavations of the tomb were conducted by “treasure hunters” and, unfortunately, its exact location is unknown, and most of the artifacts settled in the museums of the Netherlands, Italy and the United States. Nevertheless, luck again smiled at the archaeologists, and in 2010 the Cairo University expedition announced the reopening of the tomb.

Among the new finds there were several broken vessels containing a certain whitish mass, which had solidified from time to time, and the remains of tissue, probably intended to preserve the contents. An analysis of the ancient product was taken up by a team of researchers from the University of Catania and Cairo University, led by Enrico Greco (Enrico Greco).

The scientists isolated the protein component from the samples and analyzed by liquid chromatography and mass spectrometry. The composition of peptides unambiguously indicated that the whitish mass is a product made from cow and sheep or goat milk.

A detailed analysis of the tissue showed that it was suitable for storing solid products and was not suitable for liquids. Researchers tend to believe that the mysterious product was nothing more than hard cheese. And with the age of about 3300 years, it rightfully becomes the most ancient hard cheese in the world (previously this title was held by the ancient Chinese artifact). But the chemists have found something else.

It turned out that the ancient product was infected with bacteria of the Brucella melitensis type. These microorganisms are transmitted from animals to humans through unpasteurized dairy products and cause a potentially life-threatening disease of brucellosis. It remains to be hoped that none of the contemporaries of Ptahmes did not have time to taste this “delicacy.”

More details with the analysis of the finds can be found by reading an article published by the authors in the journal Analytical Chemistry.