In the era of dinosaurs, water flowed on the surface of Mars 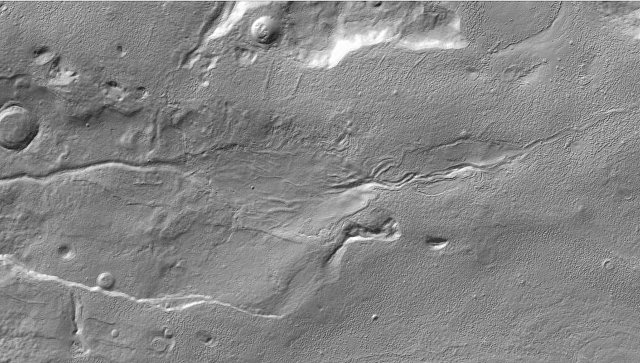 Planetologists found in the northern hemisphere of Mars large deposits of ice and traces of meltwater flows, moving on its surface relatively recently, at the time of the heyday of dinosaurs on Earth.

“We thought for a long time that the middle latitudes of Mars are too cold for the formation of meltwater streams – average temperatures there do not exceed 55 degrees Celsius below zero.Our observations show that underground volcanic activity and glacier collisions could produce enough heat in a recent past to melt some of them, “says Frances Butcher of the Open University of the United Kingdom in Milton Keynes.

In recent years, scientists have found many hints that on the surface of Mars in ancient times there were rivers, lakes and entire oceans of water containing almost as much liquid as our Arctic Ocean. On the other hand, some planetary scientists believe that even in ancient times Mars could be too cold for the constant existence of the oceans, and its water could be in a liquid state only after volcanic eruptions.

The discovery of traces of the most powerful oceanic tsunami on Mars, as well as some other data on its geology, make many scientists believe that liquid water could exist on Mars not always, but only occasionally, when large meteorites fell on Mars or when its volcanoes “woke”. Streams of such meltwater could break through the giant canals on the surface of Mars and form temporary oceans and lakes that did not freeze hundreds of thousands and millions of years.

Butcher and his colleagues found that similar episodes of ice melting could have occurred on Mars recently, about 110 million years ago, studying images of moderate latitudes in the northern hemisphere of the planet, obtained with the help of MRO probe chambers.

Glaciers of the Earth and Mars, as scientists say, do not stand still, but constantly move down the slopes of mountains or plains, receding and advancing as the temperature rises or falls. These movements of ice do not pass without a trace on the surface of the planets – very specific forms of relief appear on it, such as fjords, moraine ridges, mutton foreheads, drumlins and other objects that unequivocally testify that there used to be a glacier.

Analyzing the images from the MRO, the Butcher team tried to find similar relief forms, located near the modern Martian glaciers. Their neighborhood, as the scientists hoped, would help them understand how fast the ice of Mars is moving today and whether large-scale retreats and offensive ice caps have occurred in the recent and remote past.

On the plain of Tempe, located north of the volcanic plateau of Tarsida, NASA’s probe managed to find so-called oases – fairly low and very long hills, similar in shape to the railway shafts.

The oases, unlike many other glacial forms of relief, are formed not by the movement of the ice itself, but by meltwater streams that occur at the boundary between the bottom of the glacier and the ground and lay narrow, but long canals several tens of kilometers long.

That part of the Tempe plain, on which there are oases and the associated glacier, formed about 150-110 million years ago. This means that the streams of “real” water flowed on the surface of the red planet in a very recent past, when Mars had already cooled down and lost almost all its atmosphere.

What could melt these ice and make them retreat? According to scientists, the source of heat in this case were ice volcanoes – under the Tempe plain is a geological fault that could produce a large amount of heat and energy in the past.

These oases and neighboring glaciers, according to Butcher and his colleagues, can become one of the most interesting places for building future bases and colonies for several reasons. Not only are large water reserves preserved here, but the glacier itself can hide potential traces of Martian life that existed on the surface of the planet in the distant past.