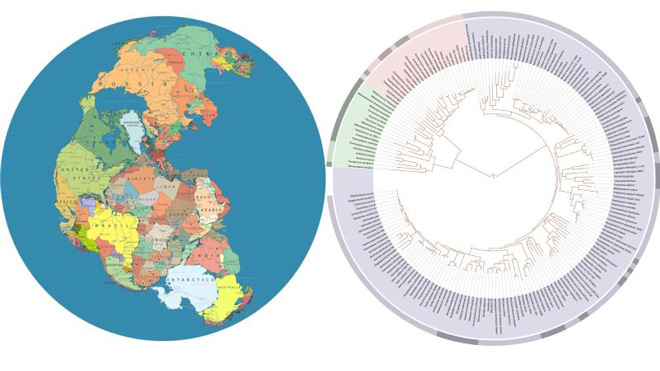 The constant movement of the continents is one of the first facts that everyone who studies the geological history of the Earth learns. So, South America comes to Africa as a piece of the puzzle. And 200 million years ago all the current continents were merged into one supercontinent called Pangea.

The evidence of the fault, which occurred 180 million years ago, was previously found in the rock. But a team of Australian scientists believes that the division of the supercontinent and the constant movement of its parts were also recorded in the history of the evolution of animals. Researchers analyzed the evolutionary development of a huge number of species and compared the findings with the date of the Pangea fault.

First Pangea divided into continents Laurasia and Gondwana about 180 million ago. The rift led to a further division of land and displacement, until the continents took up their current position. As a result, the species were isolated from each other and followed different evolutionary paths.
New species originated from animals that inhabited newly formed territories (a process called settling), or did the populations split during the Earth’s fault (substitution process)? Most scientists are inclined to believe that the leading role was played by resettlement.

Australian researchers used the Timetree.org database to determine the dates of the discrepancy between the molecular clocks and find out how the species separated, based on their genetics and the protein content in their bodies. They recognize that the database is not quality in places, but they work with the most complete information available. Scientists have chosen freshwater and terrestrial vertebral groups, represented on at least two continents, and have learned the date of their divergence.

After many hours of analyzing the information, it turned out that the dates of the divergence of the main groups of animals coincide with the time of separation of the continents. And this means that for speciation, substitution played a more important role than resettlement.