In the far East, we found an accumulation of killer whales mutants 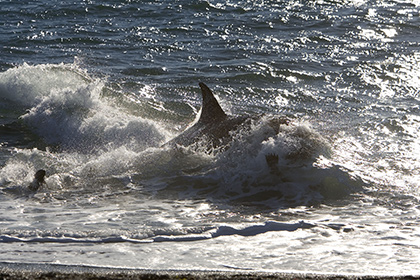 In the Northwest Pacific, scientists have found at least five white whales. The multiplicity of such individuals suggests that among orcas inbreeding has taken on alarming proportions. About the discovery reported in the journal Aquatic Mammals, and briefly about it, September 1, writes The Independent.

Normally, these animals are black and white. Individuals of white, which the scientists saw earlier was alone and undeveloped — it is believed that the color white is associated with genetic diseases and their carriers usually die young.

A group of five to eight white whales zoologists have discovered in the Kuril Islands in August 2015. Such individuals are very rare: for example, in the seas around Antarctica, which is home to tens of thousands of killer whales, scientists have never seen. It remains unclear whether the white color with albinism or other inherited diseases.

“Five, or even eight white predators in only one area of Russian waters of the Pacific ocean — it clearly indicates a problem of inbreeding (mating closely related),” said Erich Hoyt (Erich Hoyt), project officer “killer Whales of the Russian Far East.”

These predators live in groups, whose number ranges from several tens to 600-700 individuals. Even if several females pick up in aquariums or clean up for other reasons, healthy reproduction will be compromised. In addition, orcas are the most chemically “polluted” species on the planet — their bodies accumulate pollutants discharged to the ocean of the world industry.