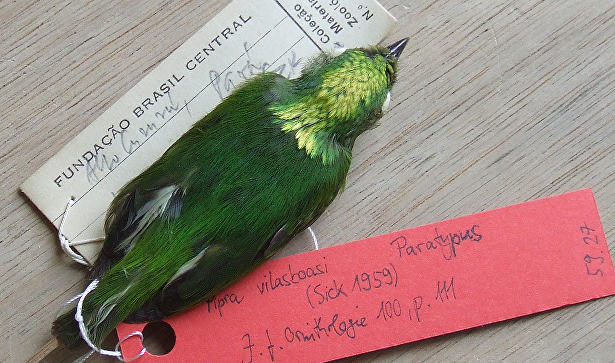 Canadian ornithologists accidentally discovered that yellow-capped pipers, rare Amazonian tropical birds, are the first “natural” hybrid birds in America and, probably, the Earth as a whole, according to an article published in the journal PNAS.

“There are a huge number of hybrid varieties of plants, but hybrids are extremely rare among vertebrates.If both ancestors of these birds did not live in geographical isolation, then yellow-capped piprose did not exist – in any other corners of the earth where closely related species live, hybrids never do not become a separate species, “said Jason Weir of the University of Toronto, Canada.
In most cases, hybrids, scientists call the descendants of two different kinds of related living things that somehow exchanged genetic material. As a rule, hybrids are often found among plants, whereas among animals they are very rare, and among the birds scientists did not know about the existence of any “natural” hybrid, whose hybrid essence was not contested by half of the scientific community.

Their rarity is explained by one simple thing – the overwhelming number of hybrids are sterile, which prevents them from continuing the genus and isolating into a separate species, even if they have a number of obvious advantages over both the one and the other parental species. There are small exceptions to this rule – tropical dolphins Stenella clymene, bison, hybrids of steppe bison and ancestors of modern cows, American red wolves, descendants of coyotes and wolves, and several species of flies and fish.

Weir and his colleagues discovered the first, as the most scientists believe, feathered hybrid, studying the relationship between the so-called pipra – small tropical birds from the family of passerines. They live in the forests of the Amazon and are marked by a colorful coloration.

To do this, scientists have made several expeditions to the tropical forests of Brazil and collected feathers and other traces of these birds containing DNA, extracted from them genetic material, deciphered it and compared each other. This comparison revealed the unusual origin of one of the rarest subspecies of these birds, yellow-capped pimentos (Lepidothrix vilasboasi).

It turned out that the genome of these small birds consisted of two dissimilar parts – about 20% of the DNA they inherited from the white-capped pips (Lepidothrix nattereri), and the remaining 80% from the opalhead piper (Lepidothrix iris). This hybrid species of birds, as further analysis of their DNA showed, appeared more recently by evolutionary measures, about 180 thousand years ago.

This was made possible by two things: a great degree of isolation of the ancestors of these pipers at the time associated with offensive and retreats of glaciers and climate changes in the tropics, and also the fact that the ancestors of white-capped and opal-olive pipers also separated not so long ago, about 300,000 years ago .

This unique example of natural hybridization led to unusual changes in the structure of feathers covering the “cap” of these birds. As the scientists note, this decoration of the males has become unusually dull for the reason that its feathers have a completely different structure in white-capped and opal-olive pipers.

This negative consequence of crossing, according to Weir, caused the ancestors of yellow-capped pipers to acquire a bright yellow plumage that attracted the attention of females no less than the brilliant white or blue cap of their ancestors. This change, in fact, was the reason why these pipers became a separate species of birds, and not just one of the varieties of their ancestors, concludes the geneticist.