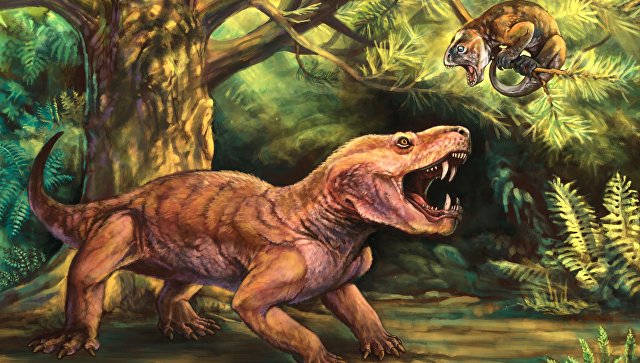 Scientists have found the remains of prehistoric “gorynich”, a large carnivorous predator, and “night lady”, her lesser “sister”, excavating around the city of Kotelnich in the Kirov region. The description of these findings was published in PeerJ magazine.

“The discovery of gorynych and nightcap for the first time indicated that, after one of the mass extinctions, carnivorous animals that lived on Earth in the middle of the Permian period” swapped places “in the ecosystem. Imagine that the bears would decrease to the size of affection, and the caresses grew to the size of the toed “- says Christian Kammerer (Christian Kammerer) from the Museum of Natural Sciences of North Carolina in Raleigh (USA).

Before the advent of dinosaurs, the Earth was dominated by quaint beetles-terapsids, which combined the signs of reptiles and mammals. They had a well-developed dental apparatus, they lacked scales, and their anatomy allowed them to run fast, and not drag the belly along the ground, as did their primitive relatives. The greatest number of remains of terapsids scientists found in Siberia and the Urals.

The most “advanced” and large animals, the so-called Gorgonops, and also their “smaller brothers”, the therocephalians, were similar in their anatomy and appearance to the saber-toothed tigers of the glacial period. Like their distant ideological “heirs,” they had extremely powerful fangs and could run fast and actively pursue prey.

Kammerer and his colleague Vladimir Masyutin from the Vyatka Paleontological Museum in Kirov found in Russia the remains of two extremely unusual mammals, who pointed to large-scale restructuring of all the Earth’s ecosystems in the middle of the Permian period, associated, presumably, with another mass extinction.

While excavating around the city of Kotelnich, where Russian paleontologists regularly find the remains of ancient terapsids, the scientists found well-preserved skulls and parts of the skeleton of one gorgonops and one terocephalus, which they called “Nochnitsa geminidens” and “Gorynychus masyutinae”.

Unlike the Snake-Gorynycha from fairy tales, his real “namesake” had much more modest dimensions – he looked like a wolf in its shape and size, except for giant canines. Despite this, he was the largest predator of his time, undividedly ruling in the forests of the future Kirov region.

Judging by the number and arrangement of teeth, Gorynich was not Gorgonops, like all the other top predators of the Permian period, but an unusually large terrocephalus that grew to the size of the largest animal monsters.

In turn, the “nightie” was one of the smallest gorgonops known to science – its size, according to Masyutin and Kammerer, did not exceed the size of a large cat or rat. She had an extremely unusual “double” set of teeth and an elongated snout, indicating that she ate insects or other mild food.

Such a change of roles and unusual sizes of “gorynych” and “night eggs”, as the scientists note, is another argument in favor of the fact that in the middle of the Permian period, about 260 million years ago, another mass extinction occurred. It destroyed the old ecosystems and forced former top predators and their victims to swap places.