In the mass death of saigas from disease, the climate is to blame 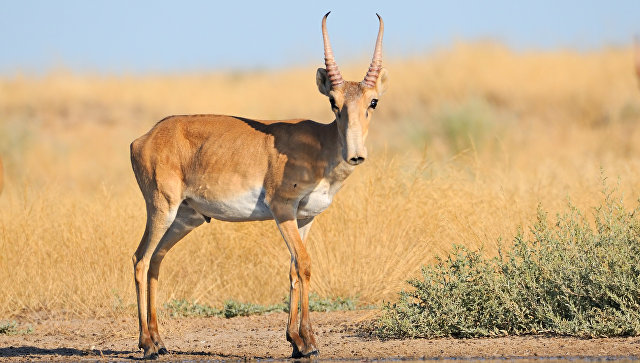 In 2015, more than 200,000 saigas died in Central Kazakhstan in 3 weeks. A large international team of authors studied the climatic factors that preceded the activity of Pasteurella multocida infection, responsible for the death of animals, and the history of the saiga population, in order to reveal the veil of the mystery of their mass death. The results of the study are published in the journal Sceince.

Saigas belong to the subfamily of antelopes and since 2002 are on the verge of extinction. The habitat of their habitat is limited mainly to the steppes of Kazakhstan, Uzbekistan and Kyrgyzstan. In May 2015, because of the outbreak of disease, the number of animals decreased to two-thirds of the world population. First, scientists came to the conclusion that the culprit was the causative agent of hemorrhagic septicemia, causing a disease called pasteurellosis.

But later biologists found out that on the eve of the mass death there were unusually wet and hot days, which, theoretically, could contribute to the activity of the bacterium. They acknowledge that until the mechanisms by which climatic factors caused the outbreak of Pasteurella bacteria activity are reliably unknown. The researchers also note that the climatic anomalies practically did not affect the mortality rate of other animal species and the incidence of man.

It is possible that saigas become ill at a time when their population is growing too much, that is, mass extinction is called upon to control the number of these antelopes. After all, a bacterium can be contained in the body of a healthy individual, without causing harm to it, and at some point it is activated. Before the saigas could easily restore the population even after such epidemics. But since 1990, they began to destroy poachers, which led to a decline in the population to a level where rapid recovery is no longer possible.

The disease acted very quickly – most animals died within hours after the appearance of clinical signs, such as dyspnea, foam around the mouth and the appearance of blood in the urine. Its speedy action was confirmed by the fact that the dead animals were quite well-fed, therefore, they suffered not so long.

Researchers point out that such a tragic event indicates the need for continuous monitoring of animal populations, especially those on the verge of extinction. This can help quickly respond to outbreaks and stop its spread as effectively as possible.