In the meteorite, an “impossible quasicrystal” 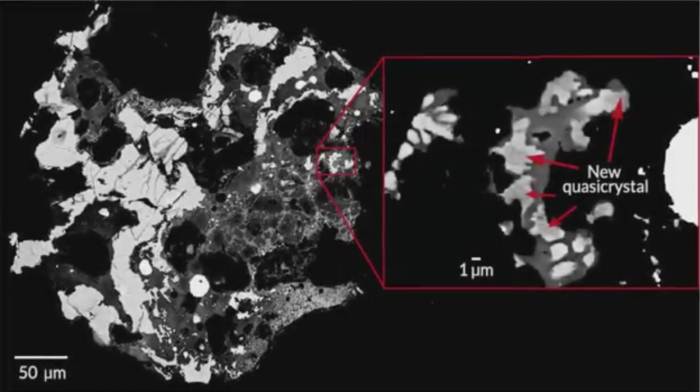 In the meteoritic rock of the Koryak highland in Chukotka, scientists discovered a quasicrystal formed in natural conditions – a solid body having an irregular type of symmetry.

In “real” crystals, the atoms are in an ordered repeating lattice. Quasicrystals have an ordered but not a periodic structure. Since 1982, such have been successfully synthesized under laboratory conditions, but are not found in nature.

American and Italian geophysicists investigating the meteorite “Khatyrka”, which fell about 10 thousand years ago in the basin of the same river and discovered in 2011, revealed a natural quasicrystal. It has the symmetry of an icosahedron – 20 faces, each of which is an equilateral triangle. The structure of the find is described in the Scientific Reports journal.

The size of the mineral, which received the designation “126A”, in diameter – about 0.4 millimeters. It has a dark gray color with visible fragments reflecting the metal components.

It is worth noting that “126A” is the third natural quasicrystal. The first two are also parts of the meteorite “Khatyrka”, but the current one has a number of features. It also consists of aluminum, copper and iron, but the ratio of these elements in each object is different. In addition, the find was the first sample found in nature even before synthesis in the laboratory. Specialized software, which researchers use, could not index the mineral model in any existing crystalline system.

How the quasicrystal could have formed in a meteorite remains a mystery. Scientists suggest that the formation of unusual symmetry occurred in the collision of two celestial bodies, which caused an inhomogeneous distribution of pressures and temperatures. In some parts of the meteorite, these indicators reached 5 gigapascals and 1200 degrees Celsius.

Study of this issue will improve the production technology of synthetic crystals.