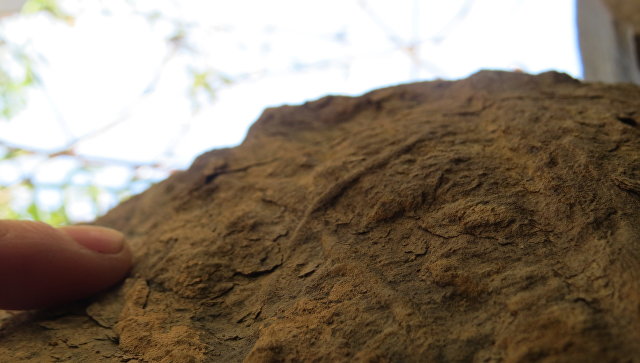 Paleontologists have found unusual fossils in South Africa, indicating that sea worms and other multicellular creatures can live at depths of six to eight meters under the ocean floor, although previously it was considered impossible.

“This discovery, in fact, opened our window to a completely unexplored world, a new habitat on our planet.” Almost nothing is known about what is happening in the deep layers of the bottom of the modern seas and oceans, and even less we understand how it was in “The fossils found indicate that life should be present in sandy, rather than in clay sediments, where it was sought before,” says Jeffrey Peakall of the University of Leeds, UK.

As a rule, the main limitation of their distribution is oxygen – its lack makes it impossible to exist even the most “economical” vertebrates and invertebrates. Therefore, for example, scientists considered the bottom of the sea at a depth of several dozen centimeters completely lifeless, since the proportion of oxygen there is reduced almost to zero.

Picoll and his colleagues found that this is not always the case, studying the sediments of the late Permian period, formed at the bottom of the sea about 250 million years ago and preserved on the south coast of present-day South Africa.

Because of geological processes in the bowels of the Earth, these rocks for millions of years were turned to the side and flattened. This allowed scientists to study the structure of the bottom of the oceans at a time when terrestrial animals and other bizarre creatures reigned on land.

Carrying out excavations in a place called Caru Basix near the Cape of Good Hope, the scientists made an unusual discovery – they managed to find traces of worms and mink of other invertebrate creatures in sandstone beds that were once the bottom of the sea and were at a depth of about three to four meters.

How did the animals survive in such conditions without oxygen? Scientists suggest that in fact, oxygen at this depth was still due to the fact that these sections of the seabed covered a special porous sand deposits with a multitude of channels and pores through which the sea water could penetrate to a greater depth.

The same channels helped the marine invertebrates to tunnel through the sand and to search in it for pieces of organic matter that sank to the bottom from the near-surface layers of the sea. Huge deposits of organic matter, according to scientists, helped the animals survive, even if they were buried under even thicker layers of sand.

Similar deposits, according to Pikoll, can still be formed today on the seabed at those points where underground sand reserves are gradually squeezed to the surface by harder rocks. It was there, in his opinion, that the most “alien” and tenacious creatures on the Earth should hide.