In the oceans there are freshwater wells 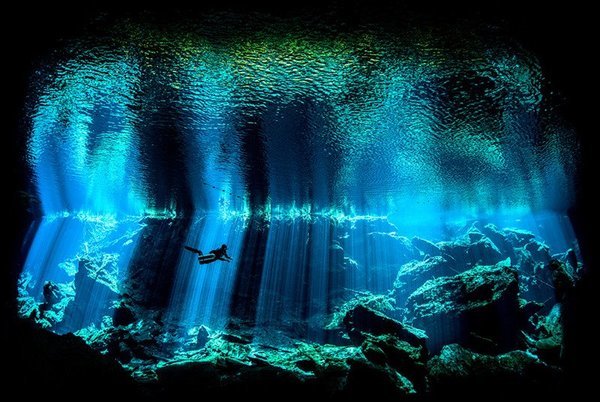 Once the fishermen of the city of Tripoli found fresh water in the Mediterranean Sea at a distance of about 500 meters from the shore. It was so cold that the fish that fell into it immediately died. This phenomenon is called a “Lebanese miracle.” The explanation is quite simple: in summer and spring, from melting snow in the mountains, only a small part falls on the irrigation of the valleys, but the rest pours into the underground waters of the rivers and is carried to the bottom of the sea by strong cold streams.

A very strong underwater source was discovered in the Bay of Kivera. It is located near the city of Neapolis, at a depth of only 20 meters. However, it is so strong that it can knock off motor boats. The source is used to provide nearby villages with fresh drinking water. Near the coasts of Southeast Greece, another underwater source was found on the bottom of the Aegean Sea. Its capacity is one million cubic meters per day and is used to irrigate 4,000 hectares of dryland areas. Many of these freshwater sources are on the bottom of other seas and oceans of our planet.

A large number of freshwater sources found in the Black Sea. Not far from Cape Foros is one where the inflow of water is more than 12,000 liters per hour. The same freshwater sources are in the Odessa Bay between Balaklava and Simeiz. The total runoff of underwater sources is about 700 million cubic meters per year. They attach special importance to the tests, where they are considered the only sources of drinking water for the population. For example, the inhabitants of some Bahrain islands have long been drinking fresh water from the bottom of the Persian Gulf. Swimmers use bags made from sheepskins, dive to the bottom and fill them with clean water.

But in the Gulf of Carpentaria, in Northern Australia, the underwater waters are so powerful that when the inhabitants lower the bamboo sticks to the bottom, the water rises upward. There is information that during wars, thus, water was collected by warships.

If very strong freshwater sources are not located deep enough, fresh water can rise up and form a kind of funnel. One of these is located to the east of the Florida peninsula.

Imagine a large “vessel” of fresh water, which has a diameter of 30 meters and is located among the waters of the Atlantic Ocean. Such a freshwater well, having a depth of 40 meters, is indicated on all existing sea charts, and ships are able to replenish their supplies of clean drinking water.

A lot of freshwater underwater springs and lakes are located near the coast of the Yucatan peninsula. The local population swims to them on their boats, and draws fresh water from the vessels.