In the past, Earth collided with a wandering planet 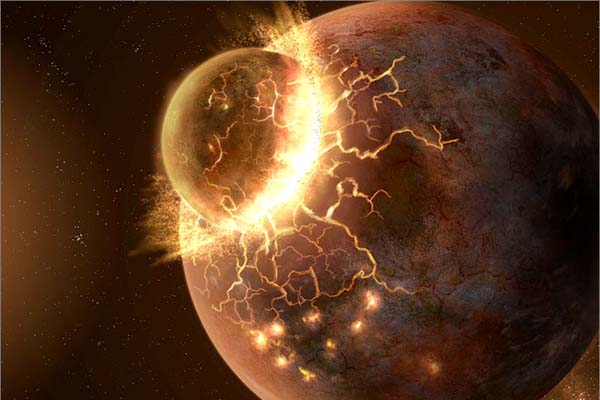 Astrophysicist Xiaolai Zhang from George Mason University (USA) presented an article in which he proves that the disintegration of Rodinia’s supercontinent is caused by an indirect collision of the Earth and an alien planet the size of Mars. The scientist questions the theory of continental drift and gives arguments in favor of his version.

In the 19th and first half of the 20th century, geologists were of the opinion that the Earth resembles a baked apple that gradually cools and decreases, and “wrinkles” appear on its surface. On the basis of the “apple hypothesis” arose the theory of geosynclines, according to which individual sections of the earth’s crust descend, and then rise, forming mountain ranges. However, as early as 1912, the geophysicist Alfred Wegener contested this scheme, suggesting that the mountain building takes place because of the continental drift of the continents. In favor of his version, he cited the argument that the outlines of the west coast of Africa and the eastern coast of South America coincide, as if these continents were part of one super-matter.

At that time, it was a bold enough idea challenging the generally accepted scientific views. It is not surprising that Wegener’s assumption was rejected. Scientists-skeptics can understand: Wegener could not explain what exactly caused the drift of the continents, and their outlines could be an accidental coincidence. Nevertheless Wegener had followers who were looking for more valid arguments in favor of continental drift.

In 1960, the spreading hypothesis was put forward, according to which mantle streams rise up to the earth’s crust in the mid-oceanic ridges, forming a new bottom and pushing old rocks apart. Thus, the lithospheric oceanic plates are somewhat like tractor caterpillars. In one place the bark rises, floats on the mantle and descends elsewhere (subduction zone). This hypothesis was confirmed when strip magnetic anomalies were discovered in the oceanic crust, a sequence of “records” about periodic changes in the direction of the earth’s magnetic field. And the farther away from the ridge the “strip” of remanent magnetization was located, the older it was.

Subduction zones also increase the continental crust, under which the oceanic crust is submerged. However, if two continental plates collide, then immersions do not occur, instead, high mountain systems such as the Himalayas are formed.

Why do mantle streams rise in the area of ​​ridges, and fall in the subduction zone? The answer to this is mantle convection. Closer to the core, the melt has a high temperature, as a result of which it rises to the bark. In its place comes a cold mantle that has already given up heat to the lithosphere. These rising and descending currents are closed, forming cells. At the top of each cell, the mantle moves horizontally, causing the plates to move in the same direction. The strength of this mechanism is sufficient to cause a split of the continent, when parts of it begin to shift in different directions.

Some scientists, including astrophysicist Xiaolai Zhang, proposed another possible mechanism for the displacement of continents. In their opinion, a large asteroid or comet fell to Earth. This can explain the sudden change in the direction of the Hawaiian Ridge, for example. In addition, convection cells, according to Zhang, can not provide long-term stability of hot spots – areas in which active volcanic activity takes place. The scientist also questions the subduction mechanism of the formation of the Rocky Mountains, a range located in the west of the USA and Canada.

To cause a continental shift, the object that fell to Earth must have been the size of Mars. Zhang believes that the impact of a small wandering planet occurred about 750 million years ago and fell on the territory where the Colorado Plateau is located (the west of the USA). Cataclysm led to the split of the supernatural Rodinia, which arose 1.1 billion years ago. The resultant crater was comparable in size to the plateau in Colorado, the area of ​​which reaches 337 thousand square kilometers. For comparison: the area of ​​the crater Chicxulub, formed with the fall of the destroyed dinosaurs ten-kilometer asteroid, is 25 thousand square kilometers.

Where did the planet-wanderer come from? 4.5 billion years ago, another planet, Theya, probably collided with Earth. It is believed that this disaster led to the formation of the moon. Teia formed at the point of Lagrange, which was almost directly in the Earth’s orbit, but for a long time kept away from our planet at a distance. If the solar system consisted only of the Sun, the Earth and the They, a collision would not occur, but the gravitational influence of other planets displaced Teia from her place and threw her toward the Earth. But 750 million years ago, the second Teiya could not be anymore – the planets of the solar system were firmly established in stable orbits.

Zhang believes that the planet-wanderer came from another system. This can occur when the solar system, revolving around the center of the Milky Way, passes through the galactic sleeves – structures with a high density of stars, gas and dust. Such a concentration of matter leads to the appearance of large stars whose life ends in a supernova outburst. Explosions can disrupt exoplanets from their occupied places, sending them to the Sun.

As an argument in favor of his hypothesis, Zhang leads an unusual geological structure of the plateau in Colorado. For example, rock layers that formed about 750 million years ago form an anomaly called the Great Unconformity. They lie not in a strict stratigraphic sequence (the older layers are below, the younger ones are at the top), but form a chaotic picture, as if something has deformed them strongly. There are also rocks of the Precambrian times, unique to the plateau, which have undergone melting and metamorphism.

The scientist also drew attention to the fact that the periods between the intersections of the solar system of the arms of the galaxy coincide with the intervals between mass extinctions on Earth within the Phanerozoic eon (which includes the Paleozoic, Mesozoic and Cenozoic eras) and splits of supercontinents.

It should be remembered that the hypothesis of Zhang is so far only a hypothesis of one scientist. While there is no serious evidence that the already formed Earth in a relatively near geological past could survive the impact of a stranger planet. The same Great disagreement can be explained by the leaching of the upper layers by the waters of the sea, periodically advancing to the North American continent during the Early Cambrian. This process of erosion is associated with the Cambrian explosion, when ions of calcium and other minerals were washed into the ocean, which changed the chemical composition of the water and led to the appearance of skeletal marine fauna. A global cataclysm that would turn the entire planet into a glowing ball, fits little with the already known picture of geological and biological evolution.

According to Zhang’s logic, theye-like planets must fall with an enviable periodicity in order to push the continents apart. So far, his hypothesis gives more questions than answers. At one time, the theory of continental drift Wegener, hastily rejected by the world community, was much more understandable and justified.