In the permafrost, a “polar princess” was found 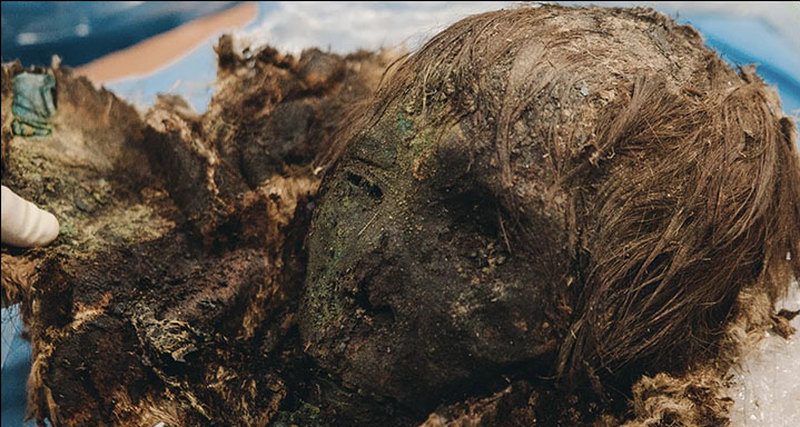 In the basin of the Ob River, archaeologists have found the mummy of the “polar princess” perfectly preserved in the permafrost. The remains that have been lying under the snow for 900 years still give an idea of ​​the appearance of the ancient inhabitant of the Circumpolar region.

Such a find of the 12th century is one for the entire world: the bodies of one woman and thirty men and children were perfectly preserved in the permafrost – and the fur in which the buried were wrapped, and their hair, and even eyelashes and skin.

Under the snow and frozen, nine centuries of not thawing soil in the Priuralsky region, bronze ornaments were preserved, which gave the skin of the face of the “polar princess” a greenish shade; Copper mummified the body of a woman.

There are no more women’s burials on the territory of the monument – only men’s and children’s (children of both sexes) total more than three dozen; Archeologists suggest that this indicates a high social status of women.

She died at the age of 35 years, having lived up to this impressive by the standards of the twelfth century, having preserved an almost complete set of teeth and a thick mane of hair. They buried her with bronze ornaments around her head and in a cap and fur, presumably, a deer, wrapping the body in a birch bark. Growth in the “princess” was 155 centimeters.

The tribe to which the woman belonged, continued hunting and fishing in the northern rivers. In the XII century, as now, this area between the modern Salekhard and Labytnangi in the basin of the Ob was not a pleasant place to live. In addition to the funeral rite, little is known about the tribe; Now archaeologists rely on the help of colleagues from South Korea to analyze DNA, which they expect to isolate from the surviving tissues in the frozen state – after analyzing the history of the “polar princess”, one can say something definite.