In the sky appeared noctilucent clouds 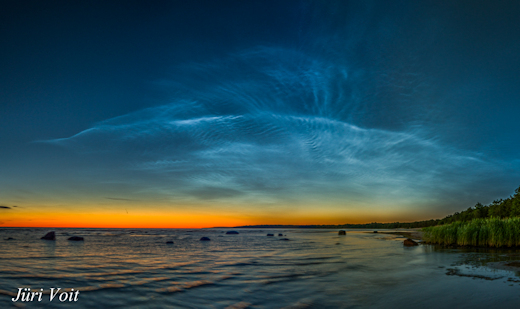 In recent days, this phenomenon has already been observed by residents of Belarus, Estonia, Poland, Sweden, Canada, Finland and Estonia.

Jüri Voight took this picture on the morning of January 13, shortly before sunrise over Kuusalu’s volost in Estonia. As he explained, it was his first observation of noctilucent clouds this summer. According to Vojta, he did not expect that they would be so bright.

Noctilucent clouds are formed when summer streams of water vapor rise to the upper layers of the Earth’s atmosphere and crystallize around meteoric smoke. Winds in the mesosphere “collect” the formed crystals into luminous threads, which are illuminated by blue light in the night sky. In the 19th century, when the noctilucent clouds were just beginning to be observed, you would have to travel to the Arctic latitudes to admire them. However, in recent years, the “surveillance zone” has spread to the south.