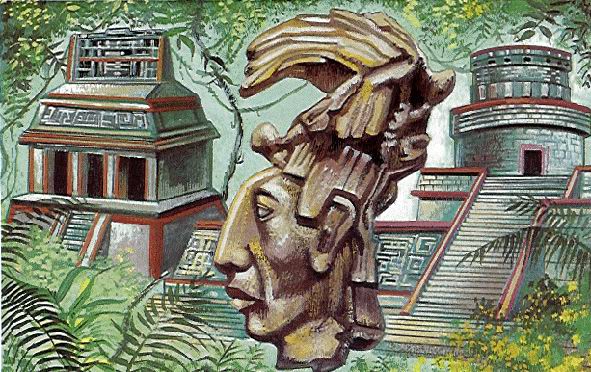 Mexican scientists found a sculptural image of a person, supposedly, Pakal, one of the rulers of the ancient Maya, during excavations in Palenque, in the state of Chiapas. This was reported on Friday by the National Institute of Anthropology and History (NIAI), whose staff and became the authors of the find.

A small mask depicts the face of an elderly man with long longitudinal wrinkles. In this regard, scientists believe that it is about Pakala, who was the ruler of the Baucul Kingdom with his capital in Palenque from 615 to 683, until his death at the age of 80 years. “It should be noted that, unlike other Maya residences, where the images are of a generalized nature, in Palenque many faces that we see on the paintings or carved in stone represent reliable images of specific people,” said archaeologist Benito Venegas Duran.

In July 2018, experts discovered a cave with rock paintings of Maya in the southeastern state of Yucatan. Sergio Grosjean, one of the authors of the find, called it unique because of the number of elements represented in it, among which, he said, “birds, mammals, cross, geometric figures, images of people including a warrior, and fingerprints.”

Earlier this year it became known that the use of laser radars allowed scientists to discover tens of thousands of Mayan buildings hidden in the jungles in the north of Guatemala. According to preliminary estimates of specialists, about 10 million people could live in these cities.

The civilization of the Maya reached its heyday in 300-900 AD. e., and by the time of the discovery of America fell into decay. Its cities and settlements were in the territory of such modern states as Belize, Honduras, Guatemala, Mexico and El Salvador.