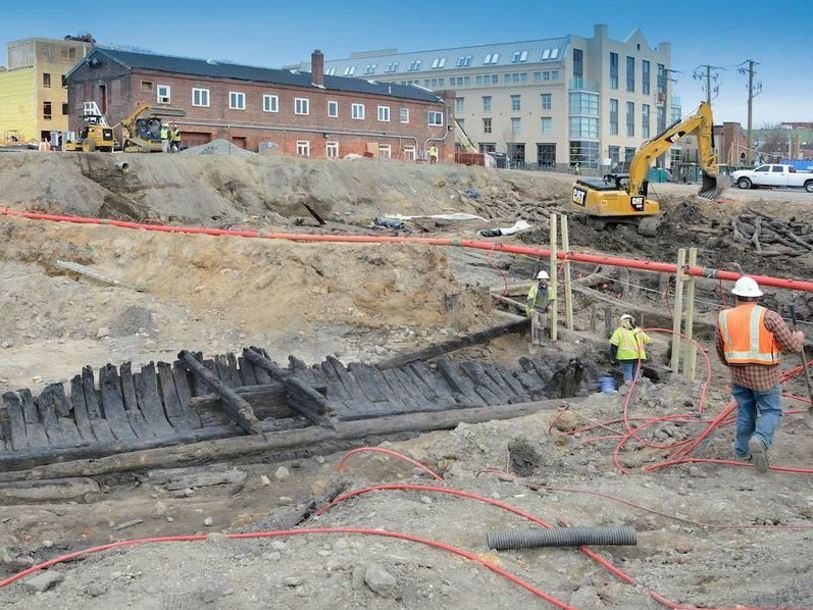 During archaeological research, before the start of the construction work in the city of Alexandria in Virginia, three ships of the 18th century were discovered, which at one time were moored to the shore and covered with earth to expand the area of ​​the city.

Alexandria is located on the western shore of the Potomac, 11 kilometers from Washington, since 1983 the city is connected to the capital by the metro line. Alexandria was founded in 1749 on the basis of an earlier settlement. In the city, large warehouses were built, where tobacco was kept from the Virginia plantations before loading it onto ships. The city intensively grew in the 18th and 19th centuries due to the commercial port located there. The estuaries of the Potomac could be visited by ships. Now the old part of Alexandria is famous for a large number of architectural monuments of the colonial era. Among its attractions is the favorite tavern of George Washington and the house in which Robert Lee was born. Any construction in the old city, according to the law, is possible only after preliminary archaeological research.

The first discovery of a buried ship in the old city of Alexandria was made in 2015 at the site where the construction of the hotel was scheduled. Studies have shown that the ship was built in Massachusetts in the 1740s, and at the end of the 18th century it was jammed and covered with earth to create the basis for building new houses. This way of expanding the urban area is not unique to Alexandria. For example, in San Francisco, there is a whole area of ​​the city that arose on the site of the flooded and buried land of ships that were thrown by people who arrived in California during the gold rush.

Now next to the ship, discovered in 2015, found three more. They were also built in the middle of the XVIII century. Archaeologists have found in the ships themselves and around them a lot of items: coins, jewelry, animal bones and even tokens of prisoners from the London prison Newgate.

Archaeologist Alexandria Eleanor Breen (Eleanor Breen) reports that one of the three ships found is already fully documented, excavated and extracted from the earth. The wooden parts of the ship are now placed in tanks with water to stabilize their condition. On the other two ships, archaeological work continues. Scientists have already established that one of the ships found was naval, and two – river. Having examined the adjacent site, Eleanor Breen and her colleagues came to the conclusion that the presence of other buried ships on this bank of the Potomac is unlikely.