In the UK, found a Roman lead ingot 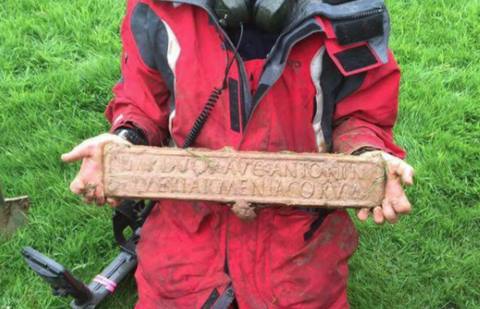 British Amateur archaeologist Jason Baker, who is in search of artifacts using a metal detector, has found a unique ingot, which has lain in the earth for two thousand years.

Ancient lead ingot stamped with an inscription on it, Baker was found on a farm in Somerset. The search for relics with this metal detector treasure hunter began a year and a half ago, and relatively quickly was able to detect a unique thing.

“Usually on a good day I find only a few Roman coins, so this discovery changed my life,” shared Jason Baker vpechatleniyami.

His find is a 38-pound lead disc, on which is stamped the name of the Roman Emperor Marcus Aurelius. In the opinion of the treasure hunt, when the Romans invaded Britain, they mined lead, formed it into large blocks, printed on them the name of the Emperor and sent to Rome. One of the blocks, apparently, was lost during transport and for two thousand years has lain in the earth.

According to a member of the club of treasure hunters Shaun MacDonald, the last time a gold bar found in the 18th century.

“Find this hard, it’s so rare that it is difficult even to imagine, how much such a find. A minimum of 60 thousand pounds, but the price can be higher than five times” – tried to assess the find MacDonald.

By the way, the discovery does not fall under the law about the treasures, as made of lead, not silver or gold. That’s why Jason Baker is not obliged to give half the proceeds to the owner of the land, but promised to share with him part of the profits.

Previously, the hoard of Roman coins worth several million euros found Spanish plumbers. Workers were laying water pipes, when suddenly stumbled upon ancient coins engraved with images of Roman emperors Maximilian and Konstantin. The money was placed in 19 of amphorae and well preserved.