In the Ulyanovsk region found the ichthyosaur with four nostrils 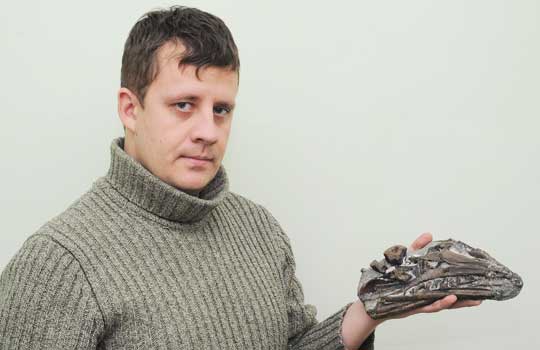 The Volga region is unusually rich fossil remains of ichthyosaurs – marine reptiles with fish-like body, inhabiting the seas and oceans of our planet in the Mesozoic era. Found among them, and completely unexpected forms, for example, with four external nostrils instead of the usual two.

The fossilized skull of this creature found in 2011 on the territory of Sengileevsky paleontological reserve of the state head of the sector “the fossil gallery” Ulyanovsk regional Museum of local lore Ilya Stensen (pictured above holding a skull of a new ichthyosaur). And after the Museum got its own paleontological laboratory, a rare exhibit were able to prepare and to prepare for further study by specialists

Employees of the Ulyanovsk regional Museum of local lore travel regularly to the maintenance of local paleontological zakazniks, as are the oversight of these monuments of nature.

– Then the level of the Kuibyshev reservoir was critically low in the spring, about new findings in the absence of fresh landslide and the wave erosion was not considered. However, in such years occur finds what happened, – said Ilya Stensen PaleoNews. The skull was enclosed in a highly weathered carbonate concretion and, apparently, have long been lying on the shoreline. It is even possible that this concretion has repeatedly caught the eye of paleontologists at the previous inspection, but lay it up facing the wrong way, which could be of interest. However, when I picked it up, it has become clear that this is the skull of an ichthyosaurus, because a significant part of it was out of the host rock.

The discovered material has been dated to the Aptian time (120 million years ago). Dissection of the specimen took a lot of time and effort, but eventually led to a startling discovery – the Volga found the ichthyosaurus had four nostrils!

A preliminary study of a new Museum exhibit conducted by Valentin Fischer (University of Liege, Belgium), Maxim Arkhangelsky (Saratov state technical University) showed that he loved aikataulu (Muiscasaurus). This grows up to five metres length South American ichthyosaur was recently described from baresco-Aptian deposits of Colombia, and its characteristic feature is the presence of two pairs of very large external nasal openings.

Discovered in the Sengileevsky preserve the skull also has four large openings. Despite the small size of the animal made not more than one and a half meters in length – into his jaws are very powerful teeth.

– Not quite clear what was functionally adapted two pairs of nostrils, – said Maxim PaleoNews Arkhangelsk. – Perhaps ichthyosaurs had a running nose system, as suggested for plesiosaurs. Water could enter hoani, to flow through the nasal chamber and out of the external nasal openings. The current of water washed of the olfactory epithelium. It is not excluded that one pair of nostrils let the water and the other was used for respiration. Taking into account the findings of last years made in South America and the Volga region, we can conclude that the appearance of two pairs of outer nasal opening is for ichthyosaurus evolutionary trend.

To date, it is well established the similarity of the late Jurassic fauna of the Volga and South American ichthyosaurs. Due to this finding, it may be possible to establish the similarities and early Cretaceous marine fossil herpetofauna of the two regions. However, this will only further detailed study of the skull, which will be held in the near future. The data obtained, no doubt, will significantly increase knowledge about ichthyosaurs Russia and will help to draw some conclusions about the distribution of the faunas of ichthyosaurs during the early Cretaceous time, scientists said.