In the United States showed the project of a folding skyscraper 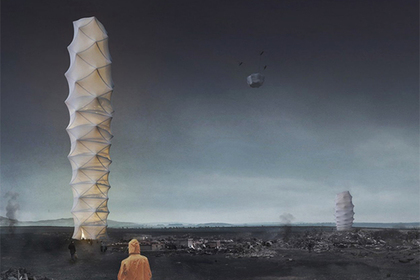 In the United States, the competition for architectural projects of skyscrapers eVolo was completed. The winners were Polish architects Damian Granosik, Yakub Kulisa and Pyotr Panchik, who presented the project of a folding skyscraper.

Skyshelter.zip skyscraper concept is designed for use in the event of disasters and natural disasters in order to provide shelter to a large number of people if necessary. The structure is easily packed into a box the size of the base of the structure and can be quickly moved to another location by military helicopters.

The name is given to projects by analogy with a zip-archive that occupies little space, but can contain a lot of information. To deploy a packed building, a helium cylinder is used. The height of the structure is adjusted as necessary. Inside the skyscraper there is a hall, a medical room, bedrooms, rooms for storing supplies and even a farm for growing vegetables and fruits. On the roof there is a special recess for collecting and filtering rainwater.

According to the architects, Skyshelter.zip occupies a 30 times smaller land area than a similar rescue campus from tents and mobile containers.

After a serious earthquake, which happened in September 2017, in Mexico, the development of rules for the construction of skyscrapers began. One example of a new earthquake-proof building was, in particular, the skyscraper Torre Reforma, capable of withstanding extreme loads. The supporting structures of the building are mobile, and small holes are made in the walls, which help the structure to withstand the earthquakes.

In Japan, after the earthquake that occurred in 2016, dome houses became popular, outwardly similar to traditional manju pies.

“Strong wind and earthquakes can not destroy domed houses, there simply are no overlaps that could be broken,” Aso Farm Land manager Misaya Konishi said commenting on the astonishing stability of the structures. This is reported by Rambler.