In the upper layers of the atmosphere, mysterious blue lightning 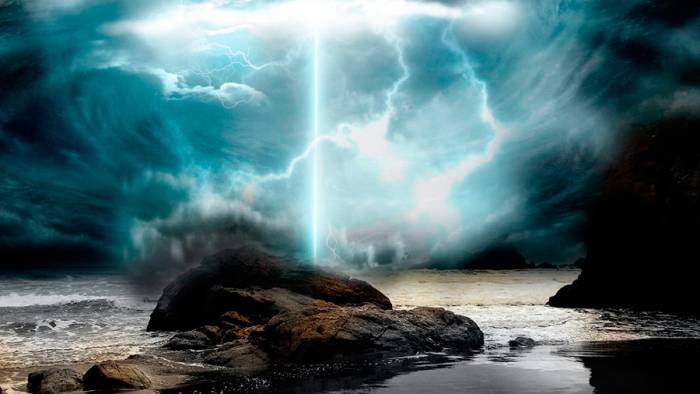 The European Space Agency reports: the Danish astronaut Andreas Morgensen was able to photograph from the ISS the mythical “upper-atmospheric” lightning – the so-called blue jets – that were considered almost mythical.

Why were scientists so happy about what sprites, jets and elves are and why even quite familiar lightning is still a riddle for scientists?

The name of one of the types of flares in the near-Earth space (mesosphere and thermosphere) – sprite – from English translates as “fairy”. This name is due to the mystery of the phenomenon. Photograph high altitude lightning is extremely rare. And the frames, as a rule, turn out to be fuzzy and smeared, since this phenomenon is unpredictable and very short-lived – lasts less than 100 milliseconds. And the video of the Danish astronaut, taken during the flight over the Bay of Bengal, clearly shows 245 flashes! Now the European Space Agency is looking forward to studying the special types of lightning. What is known about them now?

They appear in a strong thunderstorm at an altitude of about 50 to 130 kilometers (the limit of ordinary lightning is no more than 16 kilometers). These “monsters” can reach 60 km in length and 100 km in diameter. In color and form distinguish three types – the so-called red sprites, elves and blue jets.

Red sprites are most popular in the media, as they are often photographed. Elves – almost indistinguishable by the eye low-luminous flashes of conical shape. Blue jets (they were the ones who managed to be photographed from the ISS) are the most mysterious of high-altitude discharges, discovered relatively recently, in 1995. What is their unusualness? The fact is that the blue (or blue) jet “hits” along an unusual trajectory – from below upwards from the upper edge of thunderclouds, “rising” to a height of up to 30 kilometers. Why he behaves this way, scientists have to solve.

Normal lightning is a giant electric spark discharge in the atmosphere, which is manifested by a bright light flash. The current strength in it reaches up to 500 thousand amperes, the voltage ranges from tens of millions to one billion volts. The speed of lightning can reach 50 thousand kilometers per second. But the jets, elves and sprites are, presumably, discharges of the so-called cold plasma (ionized quasineutral gas). That is, they differ from conventional lightning very significantly. By the way, according to one version, the same nature (plasma) has not yet solved the phenomenon – ball lightning (many scientists in general tend to consider it a hallucination). So, aiming at studying high-altitude ranks, scientists hope to kill two birds with one stone.

According to statistics, the frequency of lightning strikes on the Earth is 100 times per second. However, the probability of a particular person being affected throughout his life is 1: 3000. Nevertheless, there are subjects who manage (though unlikely to do so) “to break the system”. Lightning is not just “love” – ​​they are literally persecuted. This phenomenon scientists also can not explain. The most vivid example is the British military Walter Summerford. In 1918 lightning hit him, making him disabled. The second time the major “shandarahnulo” on fishing in 1924 – the electric discharge paralyzed the right side of his body. In 1930, meeting with the “old girlfriend” immobilized Walter completely. But this did not end the misadventures. In 1934, when the poor fellow was already resting in the cemetery, lightning hit his tombstone, splitting it into pieces.

Another famous “favorite” of atmospheric electricity is the inspector for the protection of the Shenandoah National Park in the US state of Virginia, Roy Sullivan, also deceased. He got into the Guinness Book of Records and became famous in the US as a lightning rod man – in the period from 1942 to 1977 he was struck by lightning seven times, but he remained alive. Heavenly fire overtook Roy anywhere – from fishing to work. After one day, for a company with a loser, his wife, who was hanging clothes in the backyard of their house, suffered, local residents began to shun Sullivan, for fear of “getting under the distribution.”