In the US, one of the first multicellular creatures of the Earth 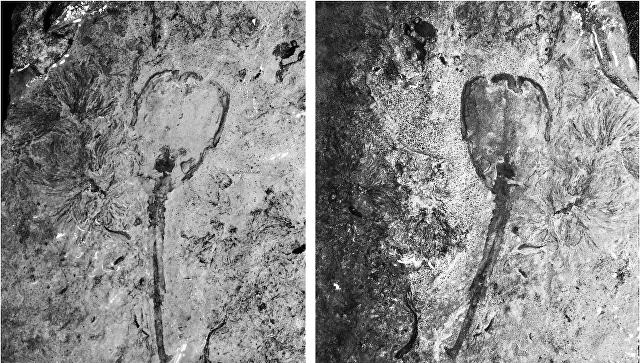 Paleontologists found in the territory of Utah remains of an extremely unusual organism that looked like a flower and lived on the bottom of the primary ocean of the Earth about 500 million years ago.

“This is the oldest example of a” stalk “filtering organism that we have ever been able to find in North America.The animal lived inside soft deposits of organic matter and silt at the bottom of water bodies and was attached to it with its foot.The body itself is the upper part of this” tulip “Inside it are all the organs, from the mouth to the intestine.In general, this is a very strange and primitive being,” says Julien Kimmig of the University of Kansas in Lawrence, USA.

Most of the modern groups and types of animals appeared about 540-520 million years ago, during the so-called “Cambrian explosion” – a sharp acceleration of evolution and an increase in the diversity of multicellular creatures. At this time the ancestors of worms, insects, fish and other vertebrates appeared.

Traditionally it is believed that the first multicellular creatures on Earth were similar to modern hydra and sponges. They were extremely primitively arranged – they consisted of only two layers and fed, flowing through water and filtering out of it microbes, plankton and particles of organic materials.

Kimmig and his colleagues discovered a very unusual example of such a “sponge” that lived in the seas on the site of modern Canada and the United States about 500 million years ago, studying the deposits of that era formed near Salt Lake City, the capital of Utah.

These deposits, as scientists say, attract the attention not only of professional paleontologists, but also of fossil collectors, who often manage to find extremely unusual and unknown species of animals. In some cases, they leave them to themselves, and in others they transfer part or all of these fossils to scientists.

Something similar happened, and in this case, several years ago, Lloyd Gunther, one of the most famous “amateur paleontologists”, contacted Kimmig and handed over to the Kansas University Museum a huge number of fossils, including an unusual “tulip” that immediately attracted the attention of scientists with their form and structure.

Its strange shape prevented paleontologists from counting this creature, named Siphusauctum gregrium, and the Kimmig team went to their own excavations to the north of Utah and to the east of Canada, where the famous schists Burgess lie, hoping to find new specimens of this unusual creature.

They managed to find something different – the remains of another representative of this kind, somewhat different in form and size from the “tulip” of Lloyd Guenter. The new species was named Siphusauctum lloydguntheri in honor of the fossil hunter, who died in 2013 at the age of 96 years.

This discovery, as Kimmig notes, did not allow scientists to understand whether the descendants of Siphusauctum exist today and to which group of living beings these “tulips” belonged. On the other hand, it now becomes clear that these creatures lived in at least two different points of the Earth, in the territories of modern Canada and the USA, and dominated the oceans of the planet of that time.

“The closest analogue, but not the sibling of these creatures, are modern sea lilies.There are unfortunately no descendants of Siphusauctum on Earth.Today we have thousands of similar fossils from the Burgess slates, but their origin and way of life, apparently , will remain forever a mystery to us, “the scientist concludes.