In the US, the remains of a newborn baby tyrannosaurus 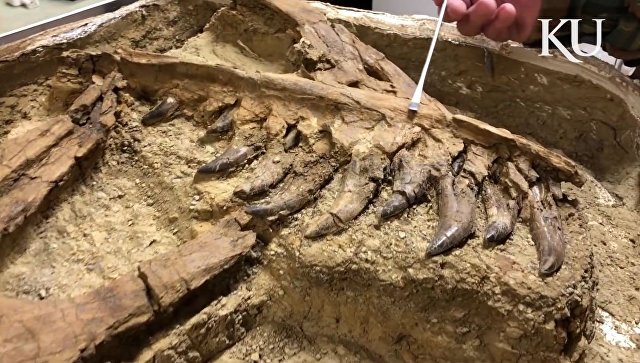 Scientists first discovered the remains of an almost newborn tyrannosaurus in the north of the US, the study of which will help resolve centuries-old disputes about the origin, diet and appearance of the “Mesozoic kings,” the press service of the University of Kansas.

“The structure of the teeth of this dinosaur suggests that it was a tyrannosaurus, but until we are not completely sure of it, the remains of young individuals of these predators are extremely rare, and therefore it is very difficult to understand whether we are dealing with a young specimen of a tyrannosaur with a slightly different anatomy, or a new kind of dinosaurs.Luckily, we have other remains that will help solve this problem, “says David Burnham of the University of Kansas, USA.

In recent years, tyrannosaurs and many of their closest relatives from among the tetanur – the largest two-legged predatory lizards of the Mesozoic era – have undergone a radical change of “image.” Today, scientists believe that tyrannosaurs were not scaly and “toothy” reptiles, as they are depicted in the “Jurassic Park” and other films, but feathered creatures whose teeth were covered with impressive lips.

Many other traits of tyrannosaurs are still a matter of controversy among scientists. We do not know yet whether these “Mesozoic kings” were predators or scavengers, how fast they grew and what their newborn babies looked like. Some paleontologists believe that the young tyrannosaurs were not like adults and ate a completely different diet, but to test this theory to date has been extremely problematic.

Burnham and his colleagues approached the solution of the secrets of the tyrannosaurs, excavating the area of ​​the famous Hell Creek formation in Montana, where more than a hundred years ago the first remains of an alleged top Cretaceous predator were found.

Two years ago, as the paleontologist notes, his team came across an unusual miniature fossil that could become as famous as the remains found in 1902 by Barnum Brown.

Initially, scientists did not know what they were dealing with, since they came across only a fragment of the upper jaw and the main and “spare” teeth that remained in it. A year later, when Burnham and his colleagues gradually removed it from the breed and collected fragments of other bones scattered around the district, they came to the conclusion that they belonged to almost a newborn tyrannosaurus.

Further study of its remains, scientists hope, will help them solve one of the oldest paleontological disputes related to tyrannosaurs – are the so-called “nanotirans”, Nanotyrannus lancensis, a separate species of dinosaurs or simply young tyrannosaurs. Their remains were found in the middle of the last century and since then scientists can not come to a common denominator and understand which of these theories is correct.

According to Burnham, the remains found by his team belonged to a more young specimen than other tyrannosaur prints. This unique feature of their findings, as scientists hope, will make it possible to determine unequivocally whether there existed “nanotirans” in fact, comparing their fossils with a find from Montana.