In the US, they are introducing bone-conduction communication

By and large, with the development of technologies of the two-way communication system, the radios have not changed much. Yes, they became smaller, their range increased, but something fundamentally new did not appear. And it became known that the US Department of Defense concluded a contract for the introduction of a communication system, in which elements will be used for the transmission of sound bone conduction. Meet: Molar Mic.

Molar in English is the common name for the sixth, seventh and eighth teeth of the human jaw. And it’s not just that. The fact is that the Molar Mic system is designed to be fixed on the teeth. And bone conduction in this case will provide a latent two-way communication even at high noise level or in case the system’s carrier needs to behave as quietly as possible. Each Molar Mic device will be manufactured individually for a specific person and after attaching to the tooth surface, the tooth and jaw themselves will conduct sound vibrations directly into the inner ear. Something like this can offer some modern smartphones and headphones, with the only difference that the speaker and microphone in them is, so to speak, “outside the body.” While Molar Mic is located inside the oral cavity. 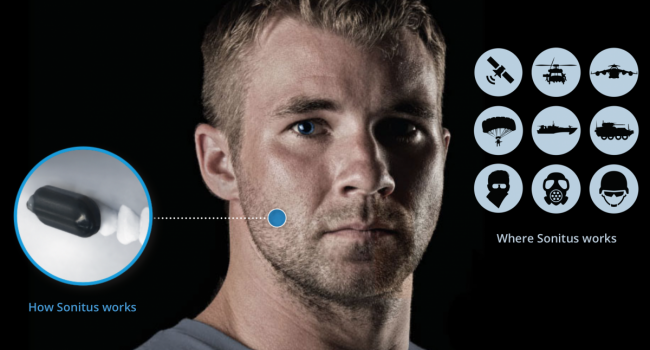 The use of this method virtually eliminates the possibility of eavesdropping on what is said “on that end of the wire.” And also allows you to negotiate, perfectly hearing the surrounding sounds. Built-in waterproof microphone, according to the authors of the development in the person of Sonitus Technologies, registers even a quiet whisper with a sufficiently loud external noise. In addition to the speaker and microphone, the Molar Mic incorporates a Tactical Neckloop necklace using Near-field magnetic induction communication technology to communicate with the device using a magnetic field. Also, the developers claim that the first tests of the Molar Mic system were very successful. It, for example, was used during the rescue of the victims of Hurricane Harvey last year.