In the USA, scientists hunt for giant Asian hornets that can displace bees 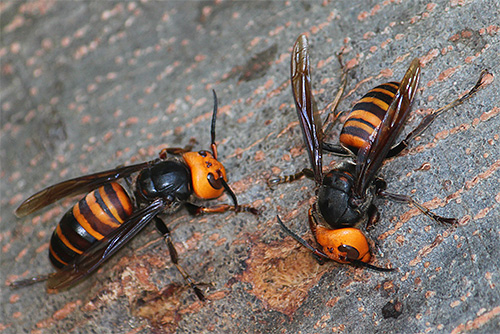 American scientists fear that giant hornets accidentally caught in the state of Washington from Asia could take root in the United States and displace bee species traditional for these places. About this, experts told reporters of the American newspaper The New York Times.

As noted in the material, the world’s largest hornets of the species Vespa mandarinia were first spotted in the United States last fall. Two individuals were found in northwestern Washington. They were found by local residents and notified authorities. The State Department of Agriculture has confirmed that this is a species that is alien to North America.

Habitat
Gigantic hornets, in particular, live in China, Japan, India, and some regions of Russia. How exactly they got to Washington state, researchers do not know yet. Various insects often find themselves in other countries when they hide in cargo containers or vehicles. Sometimes a new environment is favorable for them.

The wingspan of Vespa mandarinia can exceed 7 cm. Their bodies are covered with black and orange stripes. For such a color and ferocious disposition, they are compared with the “tigers of the insect world.” The bite of these hornets is considered very painful and more dangerous than in other species. Like wasps, they can sting repeatedly. In some Asian countries, dozens of people die every year from Vespa mandarinia bites.

Giant hornets prey on other insects and, in particular, can be very dangerous for honey bees, which are significantly inferior to them in size. Partly because of this, the appearance of Vespa mandarinia caused concern among the Washington state authorities.

With powerful jaws, hornets easily bite off bees’ heads and chew their bodies. With this nutrient mass they feed young individuals living in their nests. So they can ruin entire hives in a few hours or cause serious damage to apiaries.

Tiger Hunt
Last winter, experts conducted the necessary training and are now trying to find hornets nests to prevent them from breeding in the United States. “This is our chance to prevent them from taking root here,” said Chris Luni, an entomologist at the Washington State Department of Agriculture. “If we cannot do this for a couple of years, it will probably be impossible.” Researchers, assisted by local beekeepers, set up special traps with hornet lures in the hope of finding their nests.

The task is complicated by the fact that searches have to be conducted in a wooded area. Researchers believe that the use of thermal imaging devices can facilitate the detection of nests, which are usually located on the ground.

The state agricultural department also counts on the assistance of local residents. Employees post images of giant hornets on social media and ask if these insects are noticed.

Many other alien or invasive species live in the United States. Among them, for example, are three species of Asian carps – large-headed carp, silver carp and grass carp. These fish, brought to the United States several decades ago, are known for their extraordinary voracity, aggressiveness and fertility. They are sometimes called “river locusts.” It is believed, in particular, that in one day young individuals can eat plankton and algae as much as they weigh themselves, thus in rivers and lakes where Asian carp are planted, soon too little food can be left for other inhabitants.